Cooking with kids: wiener schnitzel and my proudest baking moment 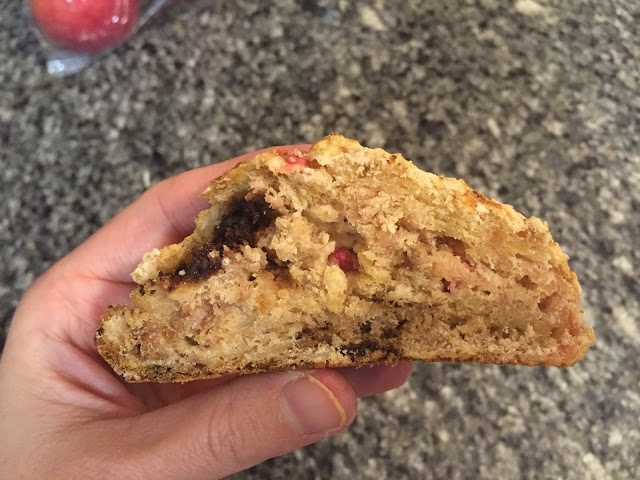 Obviously, the above picture is not wiener schnitzel.  I'll explain it in a minute.

So, I had a few thin boneless pork strips in the refrigerator and needed a quick way to cook them for dinner this evening.  I'm flying solo with the Little Bread Dudes so I couldn't do anything too complicated.  I cracked open my Joy of Cooking, and picked Wiener schnitzel.

Wiener schnitzel is a fun dish to make with kids because it doesn't require any chopping, and involves hammers.  You can also make it one-handed with a cranky baby on your hip.  What's not to love?

1. Preheat the oven to 180 degrees.  Heat 3 tablespoons of oil in a large pan over medium-high heat.

2. Put your flour onto a large plate or dish.  Do the same for the bread crumbs.  Mix together the milk and eggs in a bowl.

Steps 3-4 are demonstrated in this video.  After I did the first one, Little Bread Dude insisted on taking over the dredging process.  I did all the stove-top cooking, of course.

3. Place each cutlet between plastic wrap and flatten with a meat tenderizer. 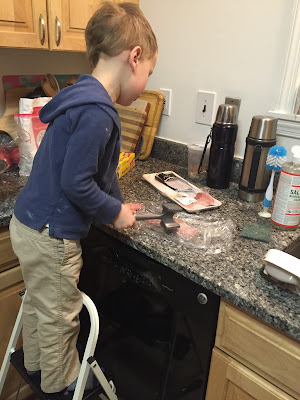 4. Dredge first in the flour, then the egg mixture, then the bread crumbs. 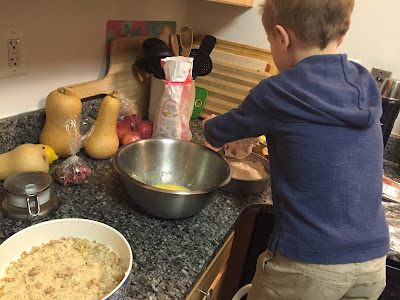 5. Place the cutlet in your pan. Flip the cutlet when it has browned on the bottom. 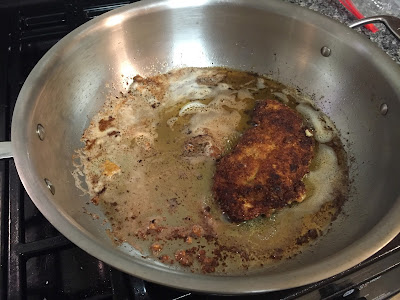 When the cutlet is finished cooking, place it on an oven-safe plate and put it in the oven to keep warm while you cook the rest. 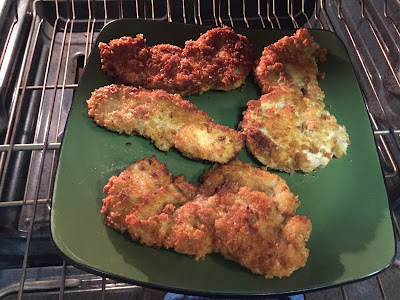 After making the wiener schnitzel, I kept them in the oven to stay warm while I put Little Bread Baby to bed.  There was flour, egg mixture, and bread crumbs left over, so I let Little Bread Dude (LBD from now on) play with those to keep him entertained.

When I came back, he proudly announced that he had made bread (also a huge mess).  I looked at his work, and I saw that he had mixed the contents of all three dredging bowls together, and had added some water and salt.

He also said he added strawberries and chocolate chips, but since we don't actually have those things, I thought he was just using his imagination.  Since I hadn't been present during the making of his dough, I really didn't have any idea what he put in there.

He covered his creation with one of my reusable plastic covers and put the dough in the refrigerator.

He was so proud of himself, and I was amazed at how much he picked up from baking bread with me.  I was impressed.  It made me choke up a little.

Since the flour, eggs, milk, water, bread crumbs and salt constitute a simple bread dough, I thought it wouldn't hurt to bake it and see what happened.

While LBD ate dinner, I surreptitiously added some baking soda and baking powder to help things along.

As I handled the dough to shape it into a ball, I noticed streaks of red and what looked like little strawberry seeds in the dough.  I figured he had added some jam to his dough.

Then I bumped the oven up to 375 degrees F.  Soda breads don't really benefit from higher baking temperatures.  I placed the tiny loaf on a parchment-lined baking sheet and baked it for 25 minutes.  I used a probe thermometer to make sure the temperature was above 190 degrees F, so it was thoroughly cooked. 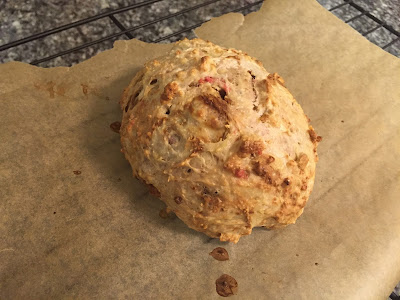 This is what came out. Browning didn't really happen, but the crust was sufficiently hardened.  It was basically a quick soda bread.  We let it cool, then sliced it.  LBD was ecstatic and couldn't get enough.  Then I noticed something odd.  See if you can spot it:

There was a big spot that was clearly chocolate; the question was, where had he gotten it?

We keep a bar of semisweet chocolate in the freezer but it's beyond his reach.  We have cocoa powder for making hot chocolate on a low shelf, but he has difficulty opening the lid, and obviously this is just one big spot of chocolate, not sprinkled throughout.  I needed to get to the bottom of this.  I asked LBD where he got the chocolate.  He said off the counter, which didn't make sense to me until I remembered: 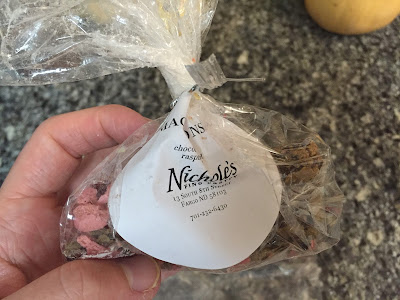 Mr. Bread Maiden had picked up macarons on a business trip, but they'd gotten broken in transit.  LBD must've seen the bag on the counter and thrown in a piece of chocolate macaron.

Then I realized: that was where the reddish smear and strawberry seeds were from, too.  The pink in the bag is a piece of raspberry macaron with raspberry jam.

They say kids are more likely to eat what they have made themselves.  I absolutely think this is true.  A few days ago, I made breaded chicken tenders, and LBD wouldn't touch them.  Today, we made breaded pork cutlets, and he devoured them.  He also ate fully half of his bread creation.  The only reason I think he didn't finish it off is he wanted to save some for Mr. Bread Maiden when he gets home on Friday. He also made sure his little brother got to sample some.


It's so fun now that he's old enough to help out, and that I've gotten to the point where I can let go and let him help, and make a mess, and try something new.  The memories are worth the mess, and I definitely want to keep this memory.

Bravo, LBD! Using the wider array of ingredients at hand was an inspiration! And he will always love to create in the kitchen.