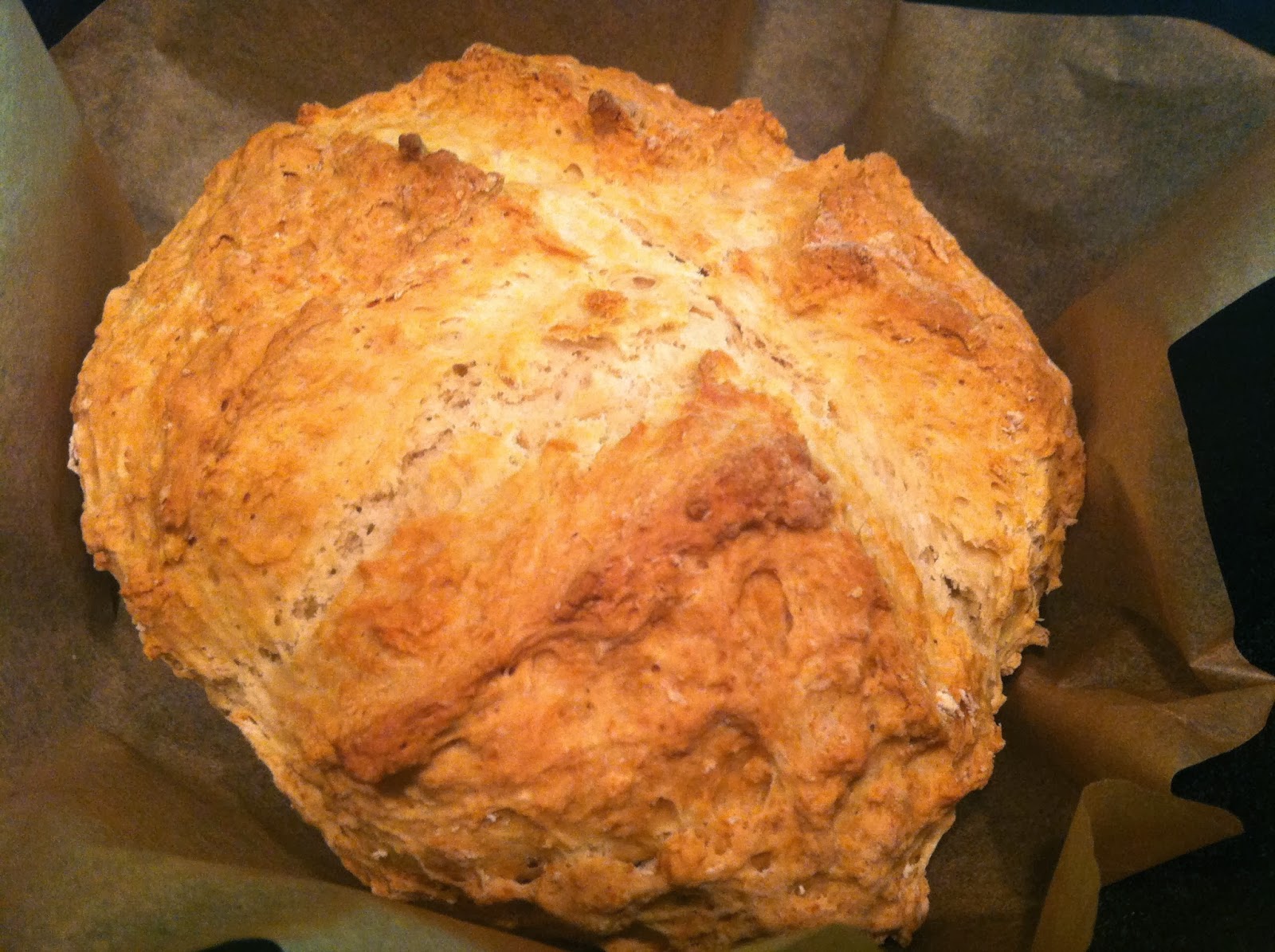 One of the things I love about my church is that each new pastor adds their own flair.  Just for example, in the past five years we've had one pastor (Ben), a transitional pastor for six months (Stephen), and a husband-wife pastor team (Marty and Robin).  Even though the church is Baptist in denomination, Ben taught at Catholic University and many members of the congregation were former Catholics.  He introduced some of the Catholic rituals, such as Ash wednesday and communion by intinction.  Then, Stephen introduced a time during the service for the congregation to share joys and burdens.  Marty and Robin, our current pastors, have introduced a Blue Christmas service for those who are grieving during the Christmas season, and are now hosting a Shrove Tuesday event.

What is Shrove Tuesday?  Until recently, I had no idea!  It's basically the British Isles' version of Mardi Gras and Carnival. You serve pancakes and have pancake races.  I've read that pancakes are traditional because they use up milk and eggs before the period of Lent.

As you can see from the title, this article is not about pancakes.  I've already written about my favorite pancake recipe here. 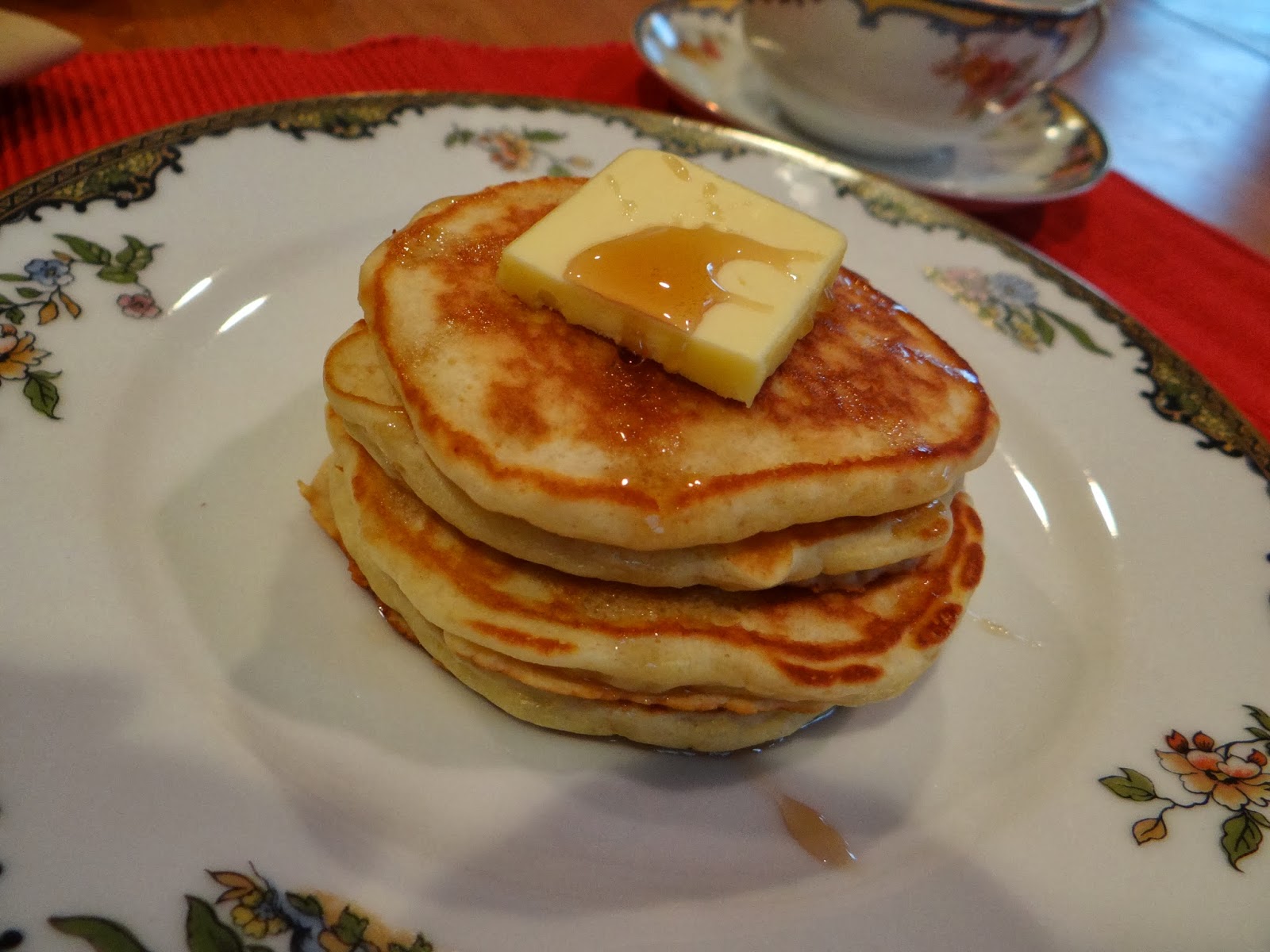 Reading about the British Isles made me start thinking about Irish Soda Bread!

It turns out, I've actually written about Irish Soda Bread before.  But this is very different.  I decided to go with a traditional recipe this time, without the raisins and orange zest since it's only for display purposes.  That said, since trying out this recipe for the blog I've made it three more times.  It's a great breakfast bread since it has the taste and texture of a biscuit, and it bakes up quickly. 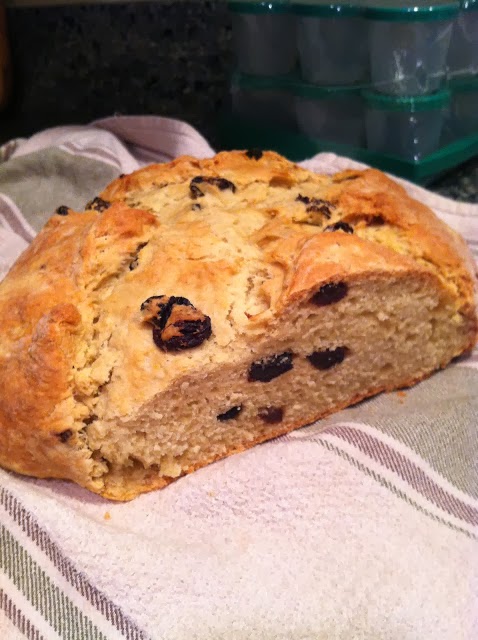 According to this NYT article, Irish Soda Bread typically only has four ingredients: flour, buttermilk, baking soda, and salt.  So that's what I went with.

Where I deviated from this NYT recipe is that they suggest using a baking sheet.  The comments said you should use a cast iron skillet instead.  I tried the cast iron skillet method and found the top of the loaf browned way too quickly in the high heat.  So I tried again using my dutch oven and the loaf came out perfectly. 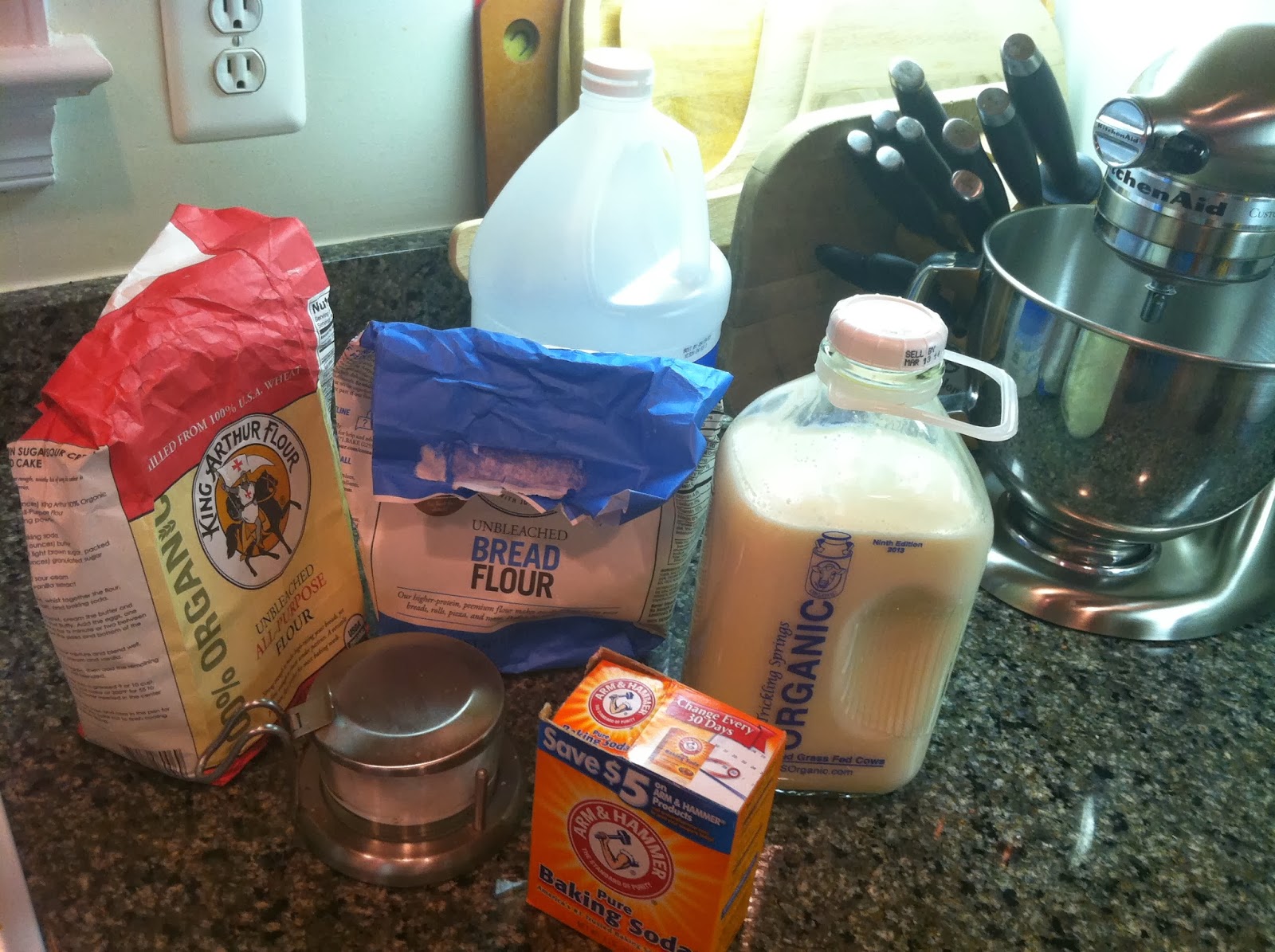 450 grams all-purpose flour, I used a mix of bread flour and AP flour.  I've also thrown in some whole wheat and pastry flour at times and it's turned out fine.

A note about the buttermilk:  I don't buy buttermilk anymore.  The first time I tried this recipe, I added a tablespoon of white vinegar to whole milk and let it sit for an hour to curdle.  The second time, I used a cup of plain yogurt and a 1/2 cup of milk. Both worked out fine and served the same function.  You just need something acidic to create the chemical leavening reaction with the baking soda. 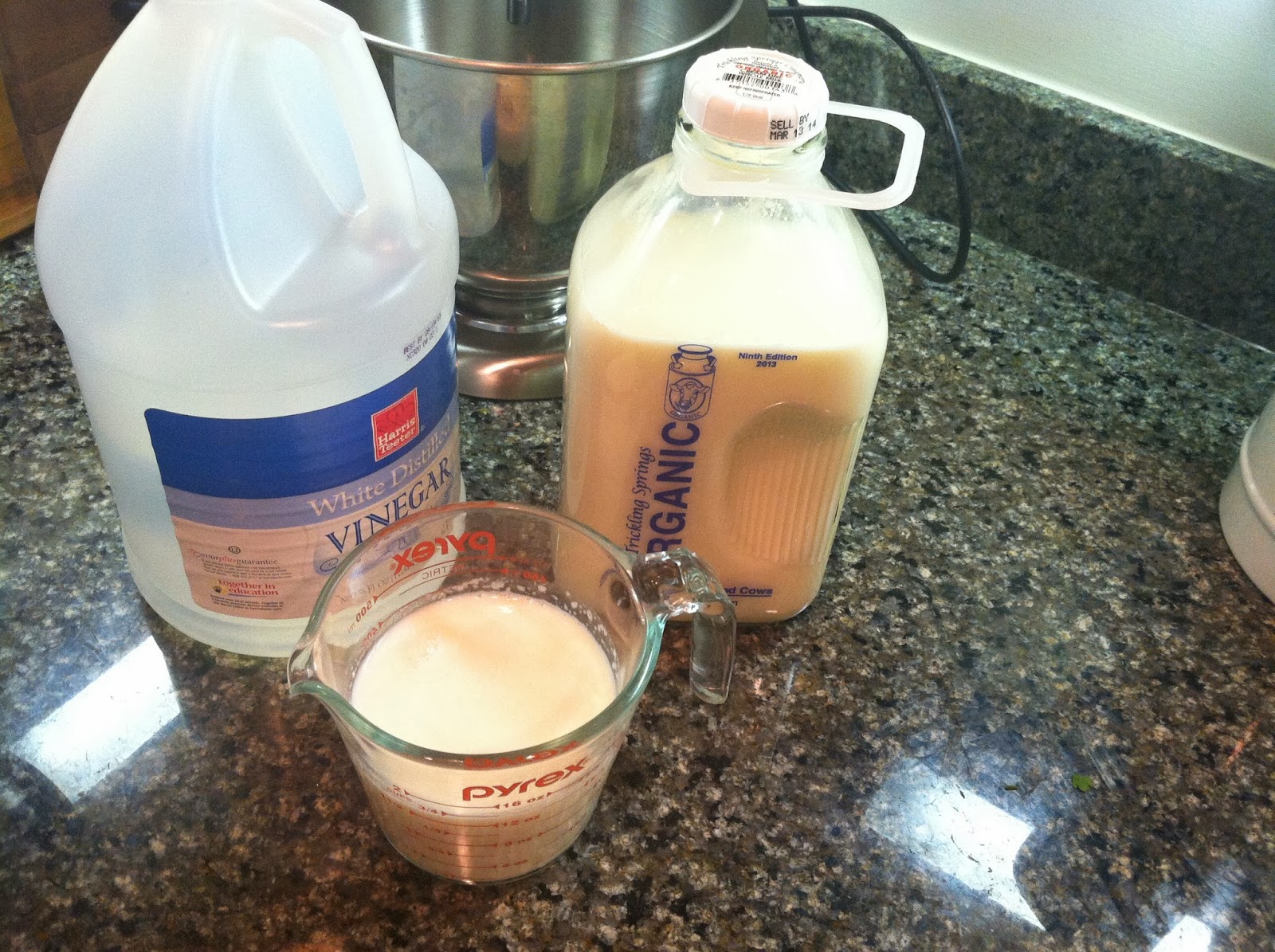 1.  Preheat the oven to 450 degrees F and slide your dutch oven into the cold oven to warm up.

2. Whisk together the flour, salt and baking soda in a large bowl. 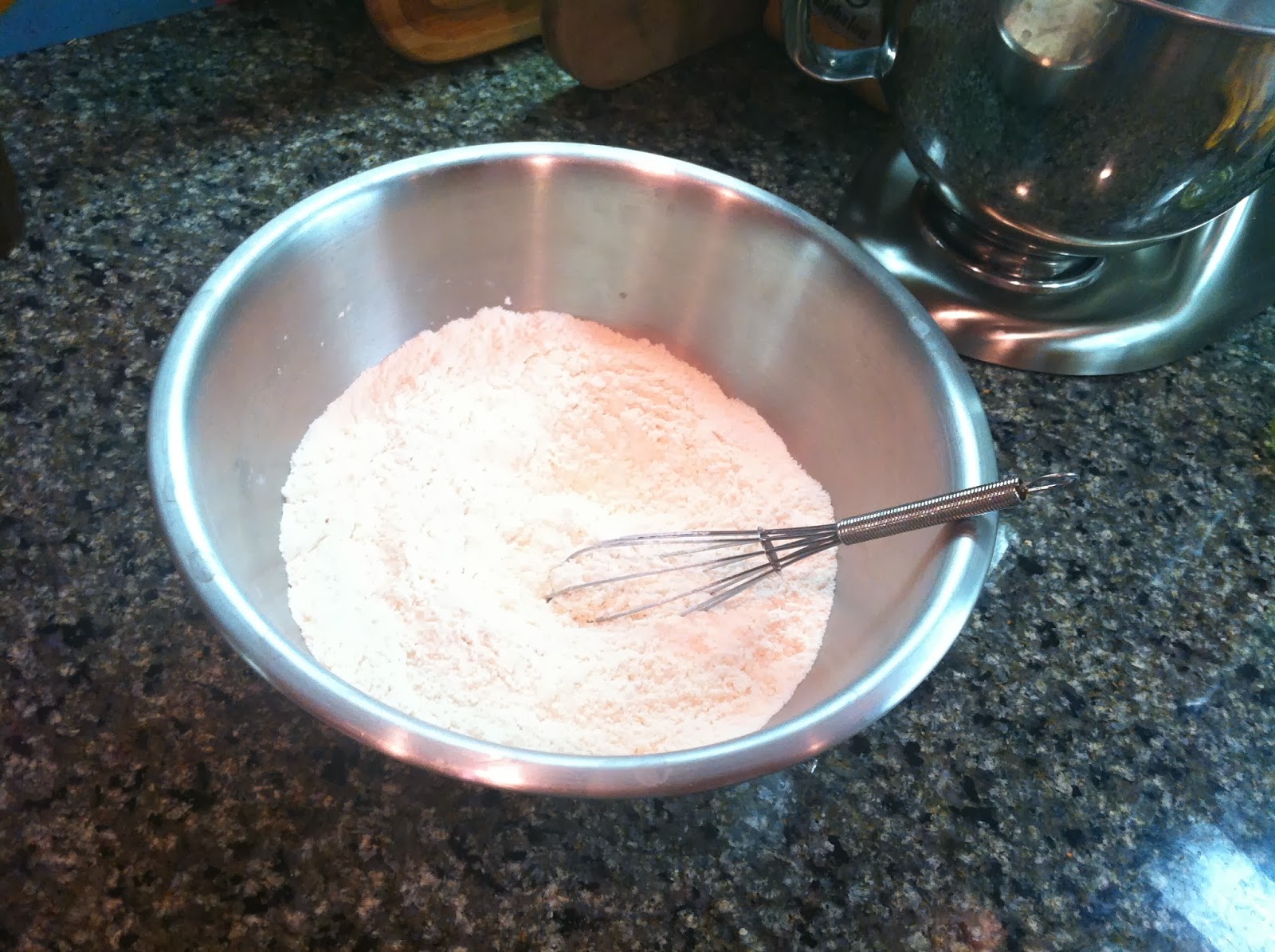 3. Pour the buttermilk (or milk concoction) into the flour mixture and use a clean hand to mix everything together.   The dough is pretty sticky, so use a folding motion.  Let the dough sit while you clean your hands. 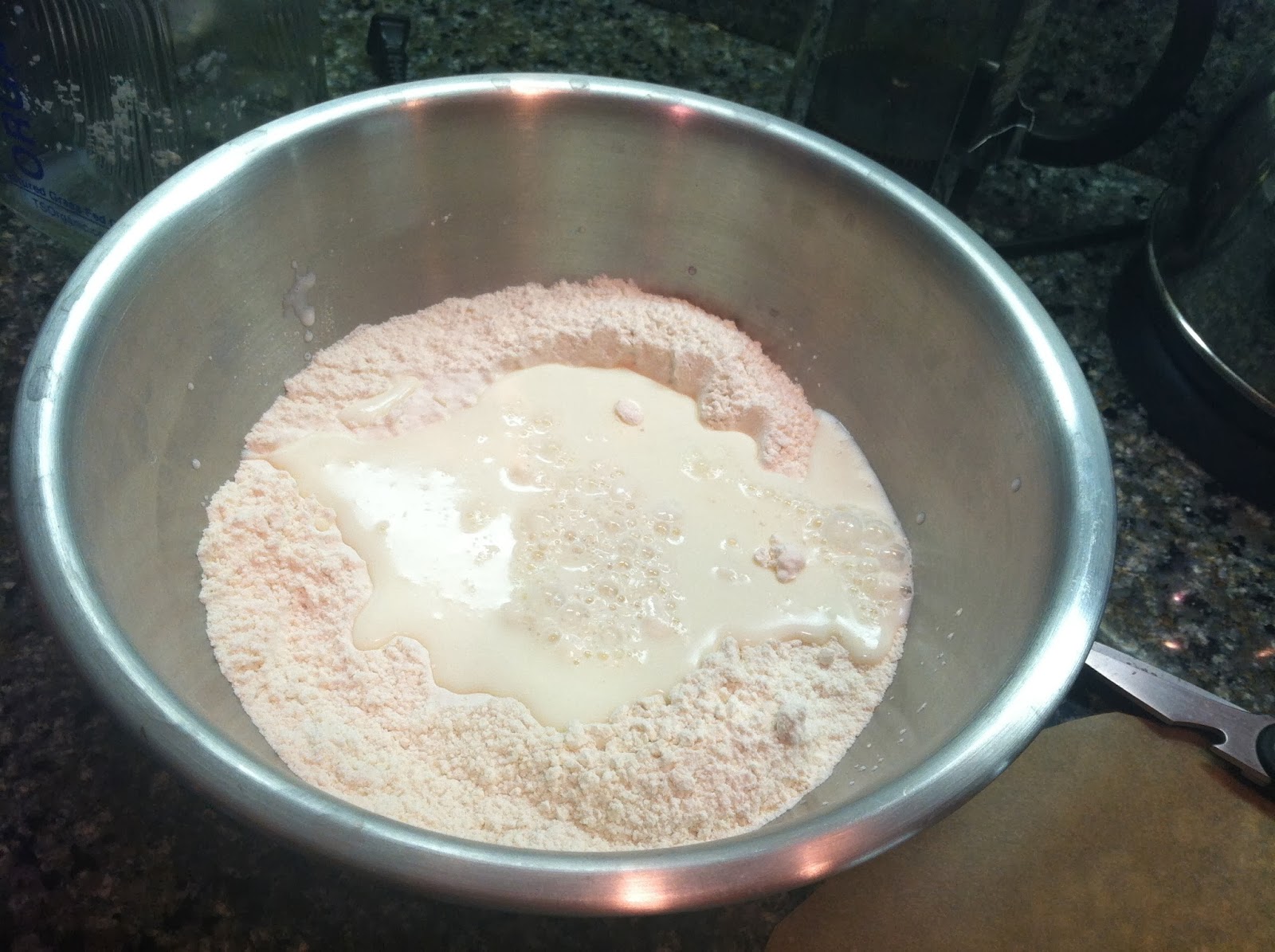 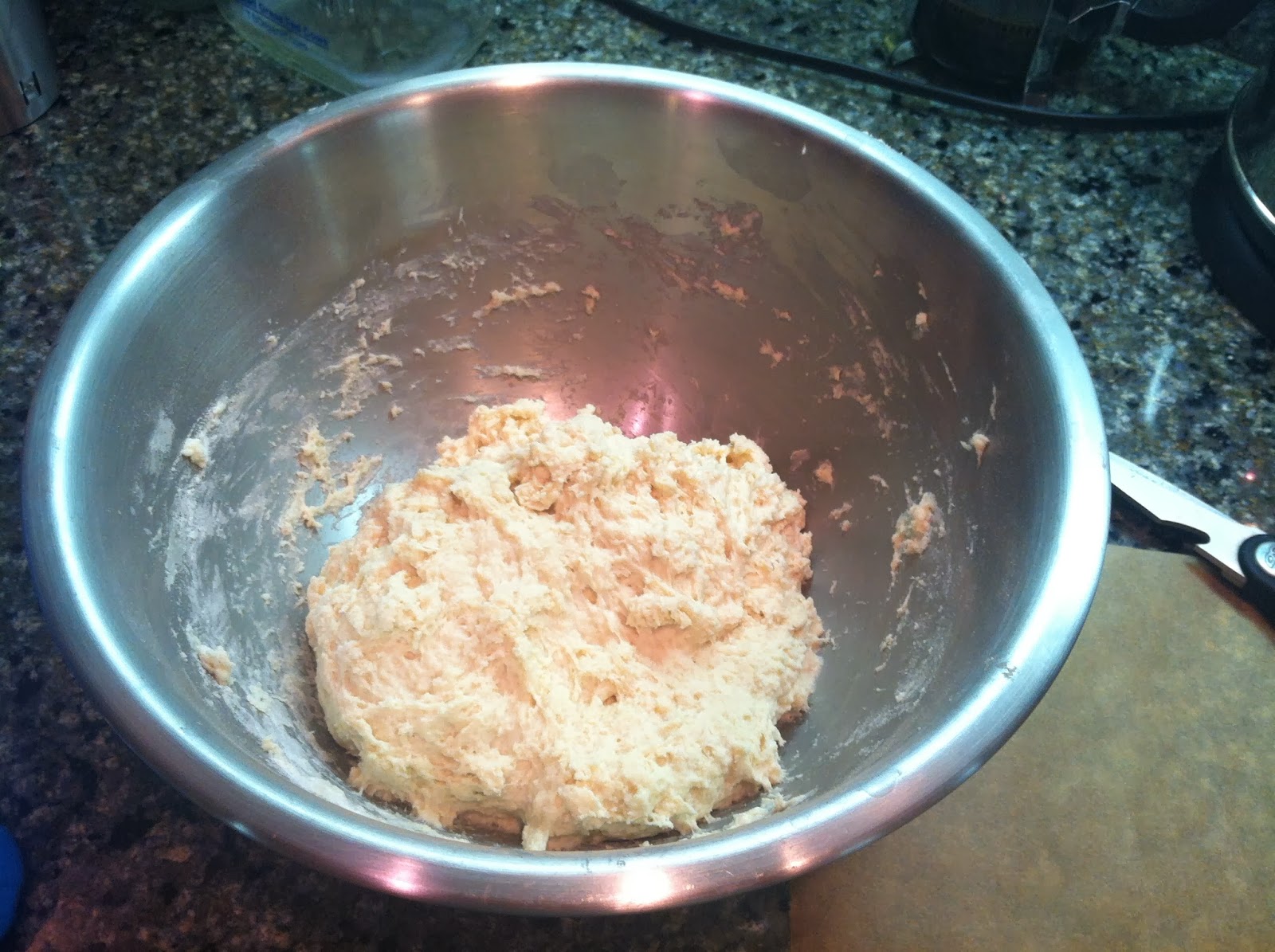 4. Cut a square of parchment and transfer your dough to the parchment.  Gently fold the dough until it forms a smooth loaf.  Flatten it down until it's about 1 1/2 inches tall all around.  This was one of my mistakes the first time around.  I shaped it into a ball and it really didn't work. 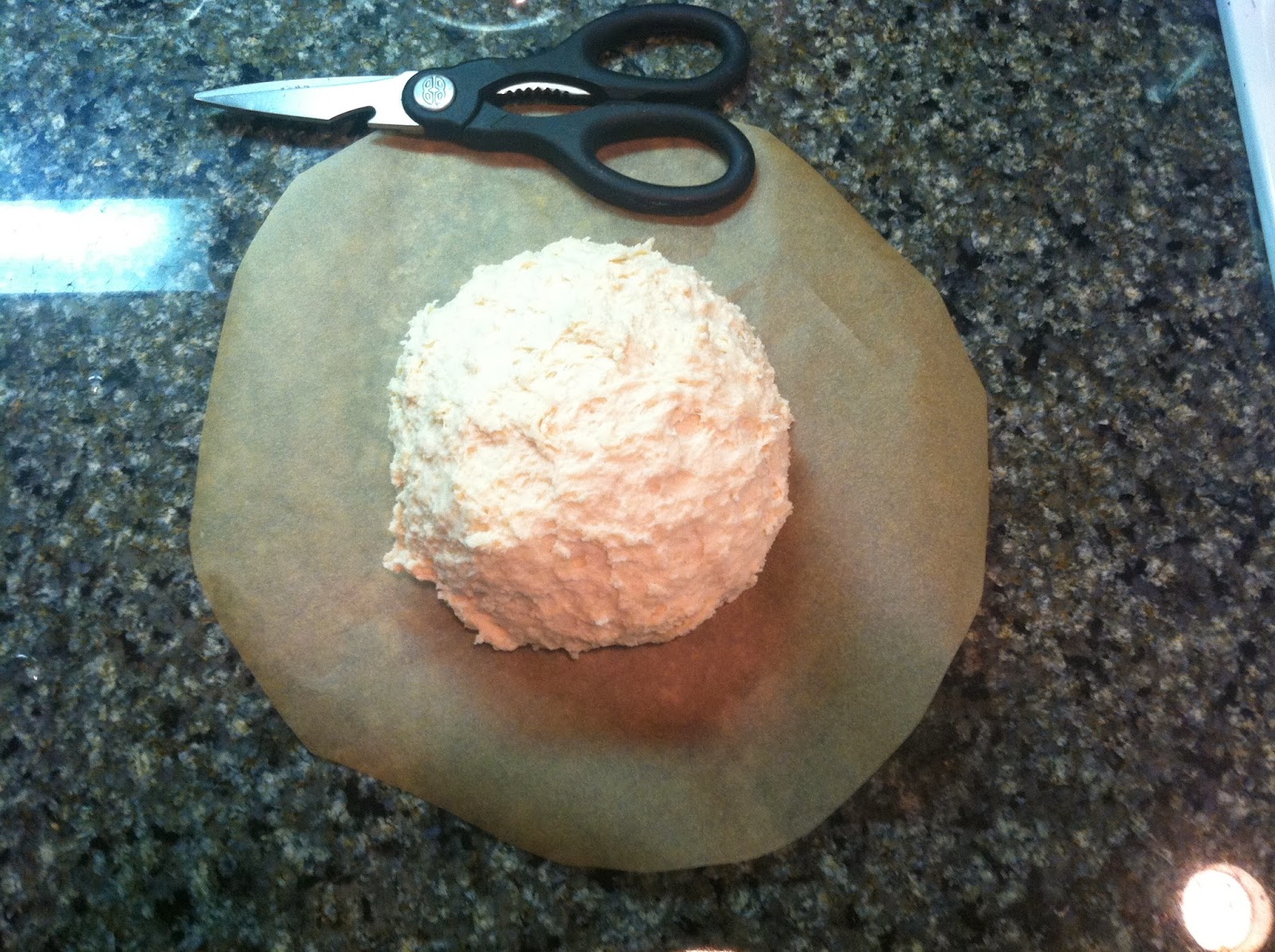 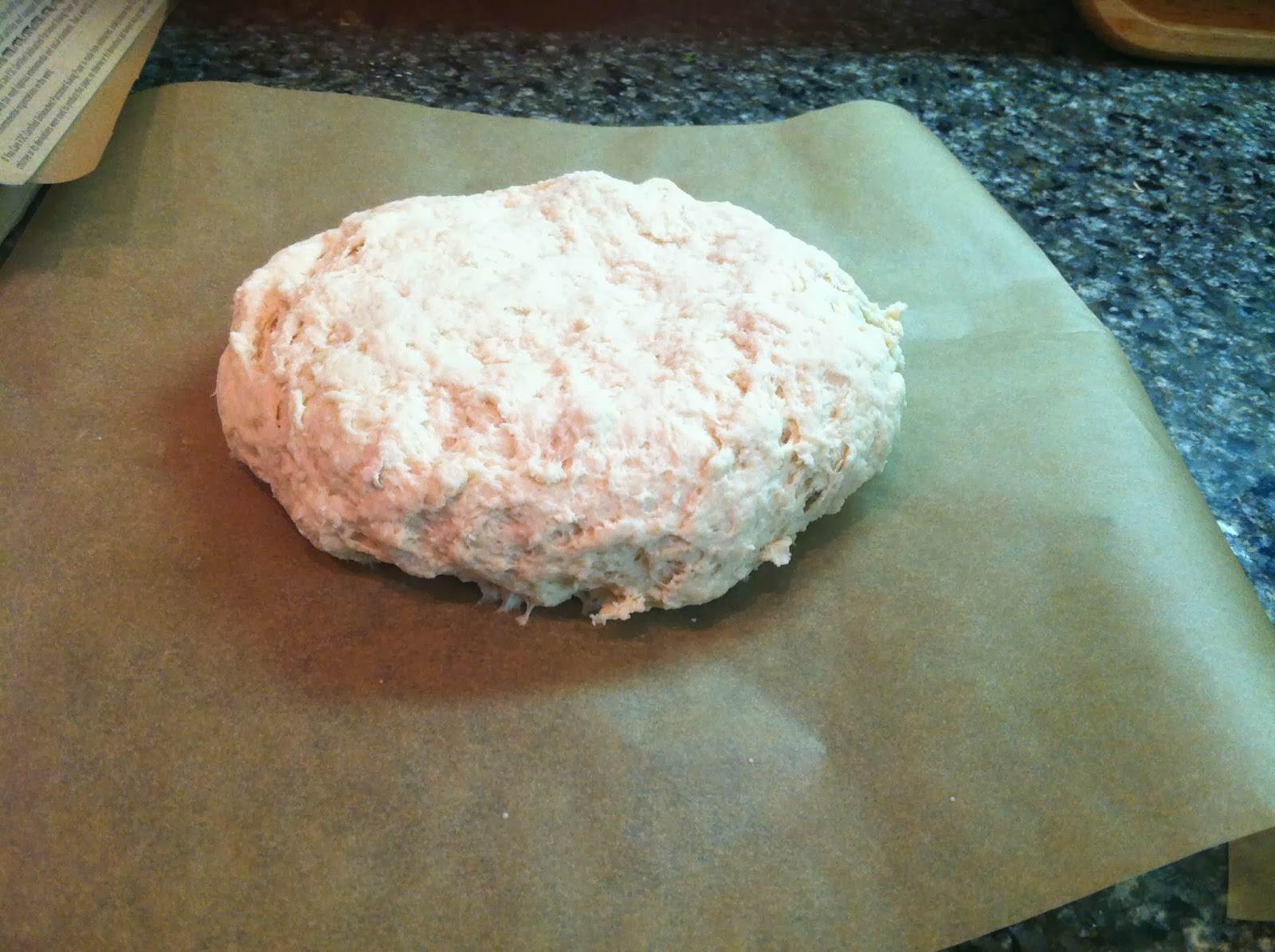 5. When it's time for the loaf to go into the oven, take a knife and cut a large, deep cross in the top.  Transfer the loaf to the dutch oven and bake, with the lid on, for 15 minutes. 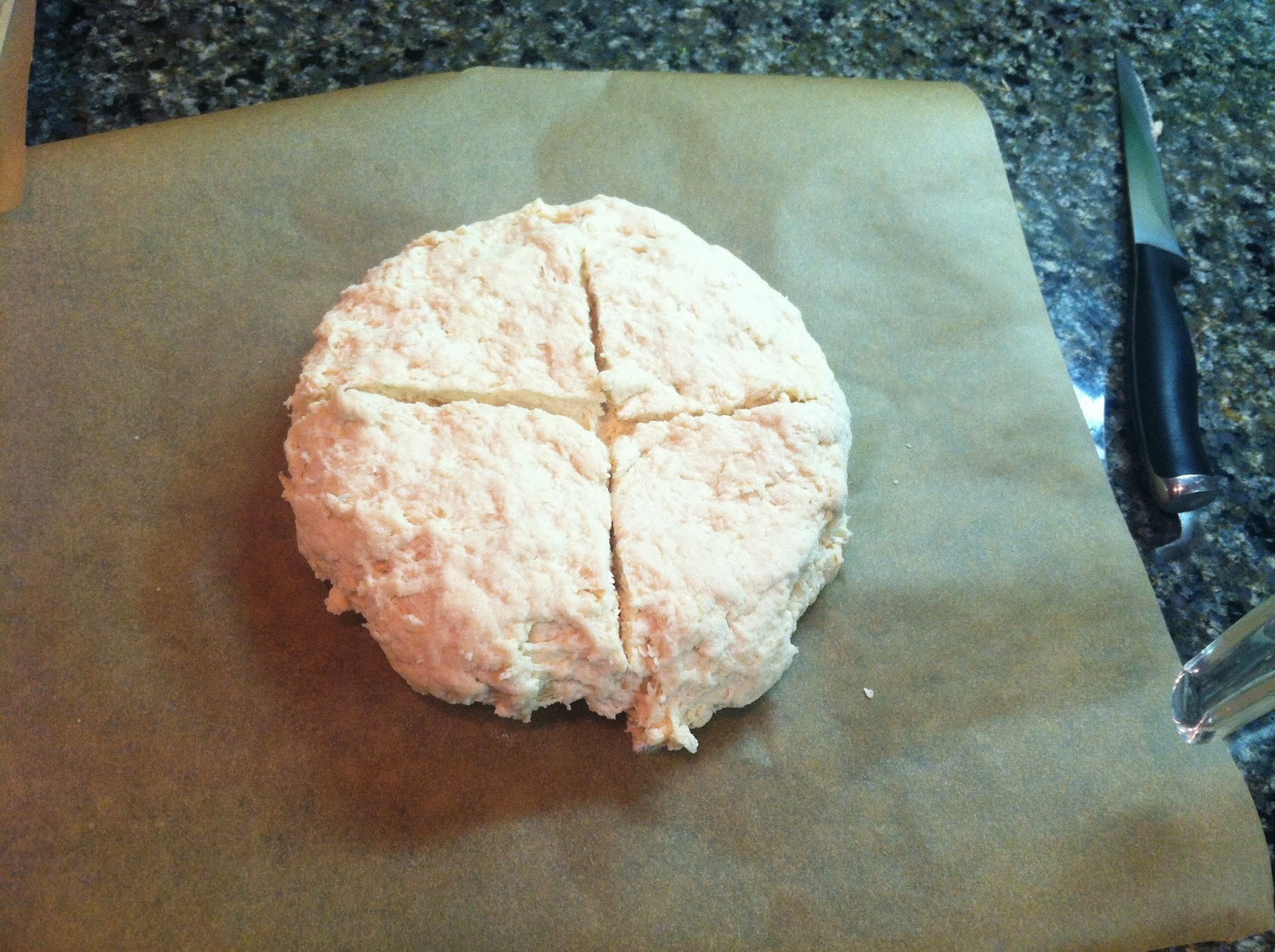 6.  After 15 minutes have elapsed, remove the dutch oven lid, drop the temperature to 400, and continue baking another 20-30 minutes, until the loaf is brown and it makes a satisfying thump when tapped. 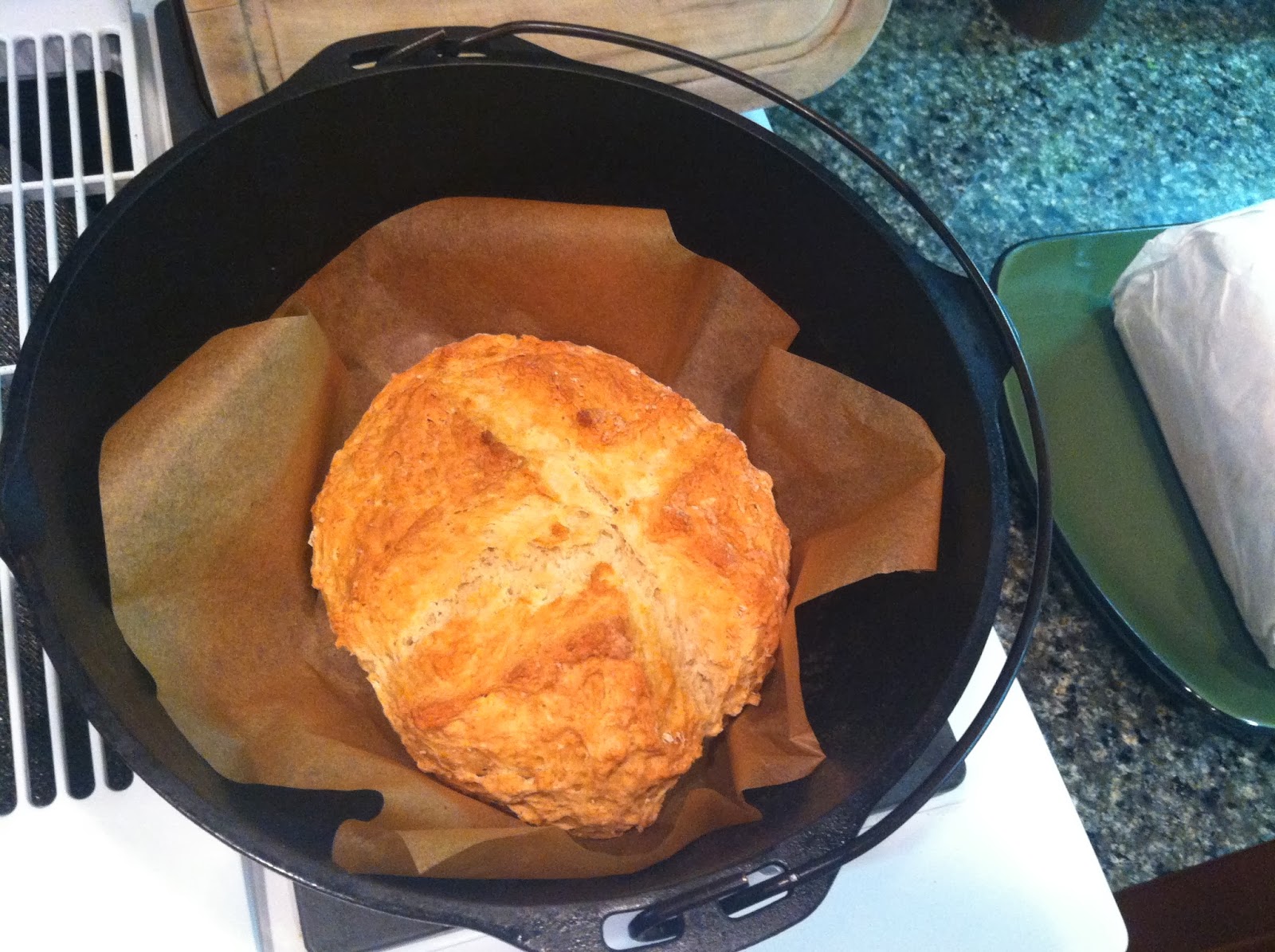 7.  You can eat this bread warm or let it cool.  The bread is more like a biscuit or scone than a regular loaf of bread.  I like it toasted with butter and jam (as does Little Bread Toddler). 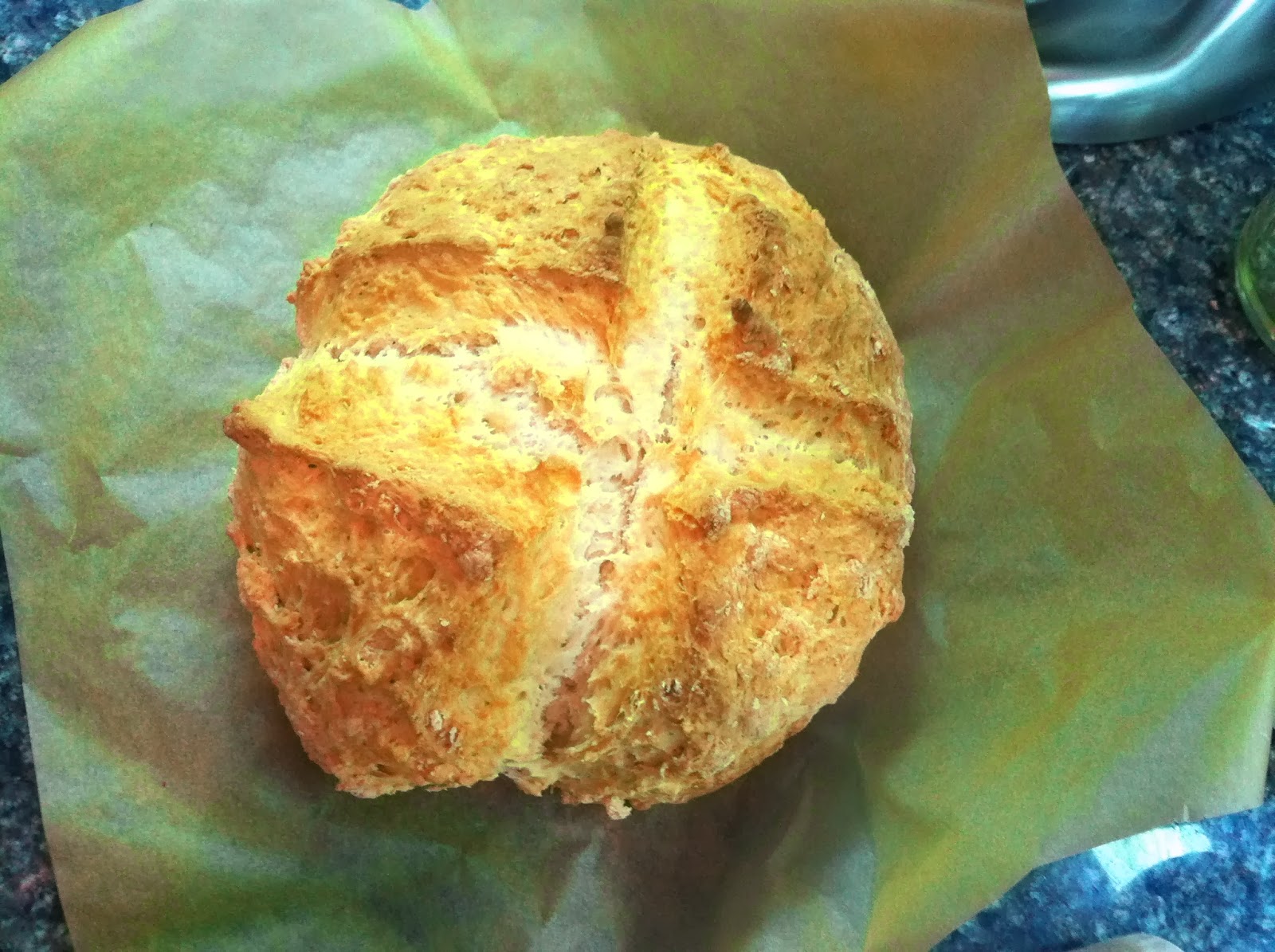 8.  I don't know if anyone on Sunday will necessarily appreciate my thought process for making Irish Soda Bread, but I do think they will appreciate when I try something new.  After all, we call ourselves an uncommon church :) 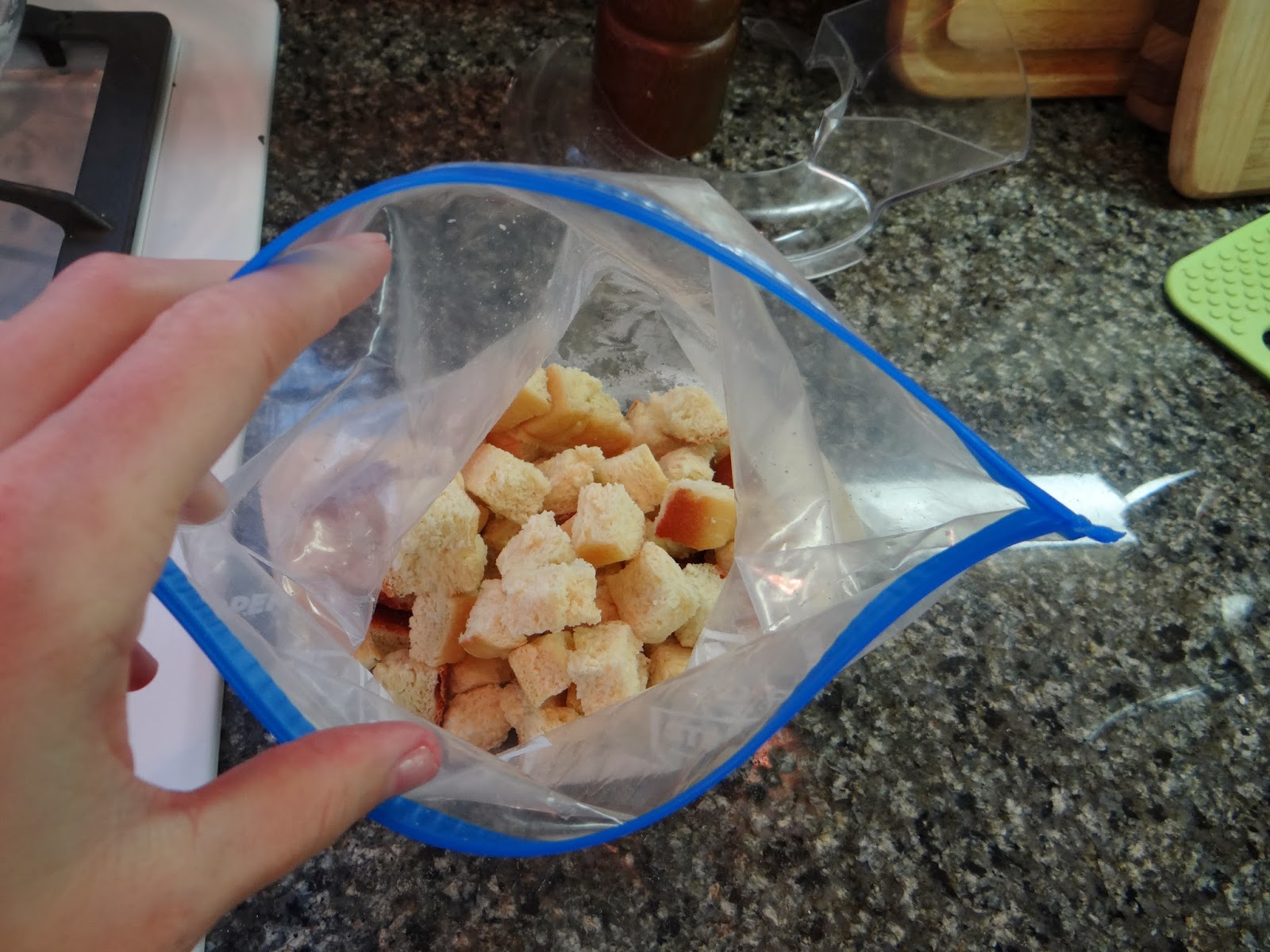 If people like the Irish Soda Bread pieces during communion, it may become a regular recipe I use.  It's easy, the texture is nice and soft, and did I mention it's easy?

I think I want to try a GF version of this. Sounds like a yummy breakfast!

I bet you could. The consistency is more cakey than bready.