Thanksgiving and preparing bread for communion by intinction 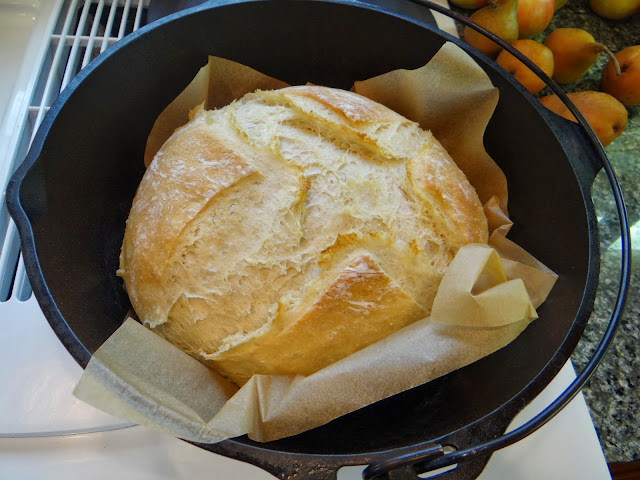 As most of my readers know, this week we celebrated Thanksgiving.  With my parents living far away, our Thanksgiving crew included my siblings, in-laws, an aunt and her family who live in Baltimore, and some friends who have become family.  We cooked up a storm and ate tons of delicious food.  Then on Friday Little Bread Toddler allowed us to sleep in and we had a lazy day: running simple errands, window shopping for houses, and going to the playground.  Oh, and preparing communion bread for the first Sunday of December.

Those of you who don't know the history of why I make bread for my church, click here.

This week is special because we are observing communion by intinction.  Catholics are familiar with the practice- it's the dipping of the bread into the wine during communion.  As Baptists we don't do it very often- usually the bread is passed around and eaten, then the wine (grape juice) is passed around and consumed.  But sometimes we do intinction when we are feeling particularly like communing with each other.

I've prepared the bread for intinction a couple of times now.  When my pastor first asked me to make it, I thought it would be no big deal.  I just made two loaves like I always do, and people could tear off a piece of the loaf and dip it.

Then the complaints started.

People did not like having to touch and eat bread that had been touched by other people, even though those other people were congregants and had been worshiping side by side with them for years.

Even though the whole point of intinction was a sense of community.

The irony was strong with this one.

But the people had spoken.  So the pastor and I cooked up a solution: I would hollow out a loaf of bread in the style of a bread bowl, cut the inside (the "crumb" in baker speak) into small chunks and put it back in the bread bowl so people could pluck a piece out instead of having to tear it. 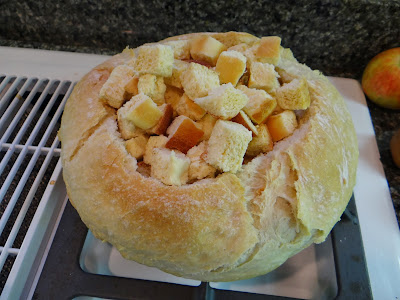 Unfortunately, that plan didn't work out so well.  The pieces I was able to hollow out were misshapen and didn't result in enough pieces.  I ended up making three loaves: one to look pretty, one to be tasty, and one for the bread bowl.

Now that I've made bread for intinction a few times, I have it down to a science.  But it took a few tries to get it right.

I started out by making my "look pretty" and "bread bowl" loaves using my simplified 1-2-3 recipe and the "be pretty" loaf using Ina Garten's Honey White Bread recipe.  But I've since stopped using the 1-2-3 recipe for communion bread.

The thing is, the 1-2-3 bread is crusty due to its lack of fat, and the first time I saw the pastor manhandling my "look pretty" loaf to get it to tear in half, I was mortified.  It requires a softer, more tear-able dough, which I will detail in a subsequent post.  I still use 1-2-3 for the bread bowl, but I've learned to double the recipe to hold all the pieces.  I freeze the hollowed-out part for bread crumbs. 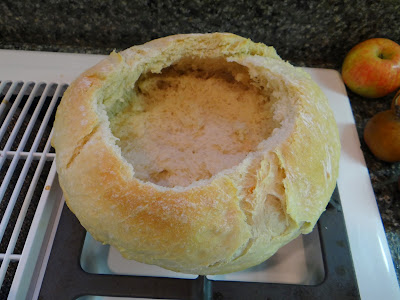 For the "be tasty" loaf, I switch back and forth between Ina Garten's Honey White and the Joy of Cooking's challah.  I find challah holds up better during intinction because the gluten really gets a chance to develop so it doesn't fall apart in the cup when it gets soaked with wine.  So that's what I've learned in a year of making communion bread.

Here's a picture of all the loaves rising on the counter. 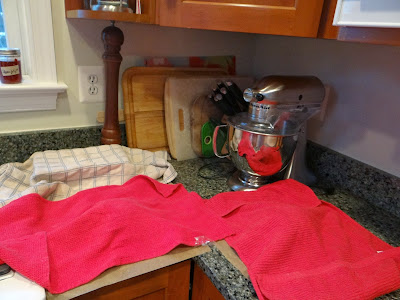 And here's one with the towels taken off. 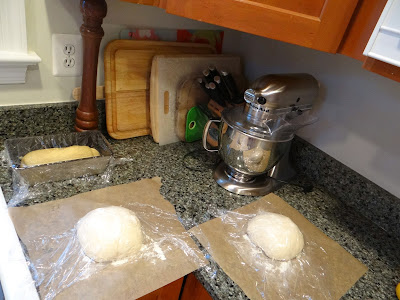 Bread Maiden's Challah (adapted from The Joy of Cooking, 1997)

1. Mix together the yeast and water in the bowl of a stand mixer with a paddle attachment.  Let it get bubbly, about five minutes.

3. Add the bread flour a little at a time.  When it's all in, switch to the bread hook and knead for another 8-10 minutes until it's soft but not sticky.

4. Oil a bowl and move the dough to the bowl, flipping the dough to coat it all over with oil.  Cover and let rest for a few hours. 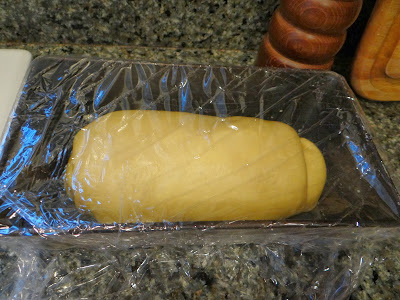 5. Grease a bread pan with butter.  Punch down the challah down, roll up into a long roll and cinch the end.  Transfer to the bread pan, cover and let rest another hour.

6. Preheat the oven to 375. Because you are going to be cutting up the loaf into little pieces, feel free to skip an egg wash.  Bake  until golden and delicious, about half an hour.  Once it's cool, cut into tiny pieces (if you are preparing to use for communion.  If not, slice and eat!) 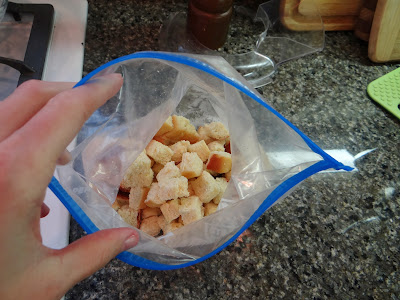 I was able to slice about 160 or so pieces from one loaf.  Your mileage may vary.  Cut down to size, this bread is chewy but still sweet.  It will be perfect for communion tomorrow.  Please stay tuned for my next posts about the recipe I made up for my "be pretty" communion loaf and the 1-2-3 double size bread bowl loaf!