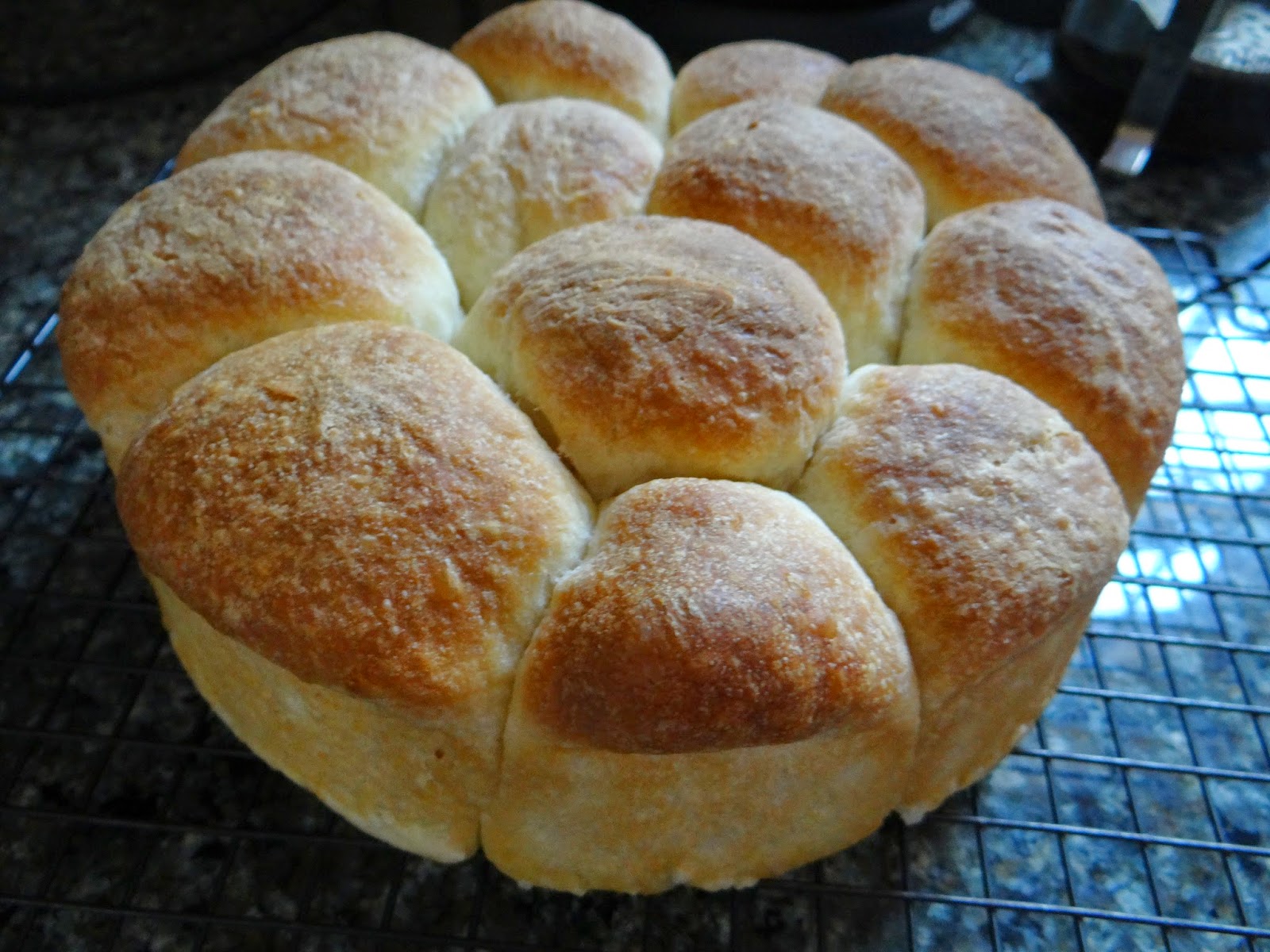 This week's Sunday School lesson is about Cleopas's walk to Emmaus, where the newly-risen Jesus appears to him and another disciple, but they don't know it's Jesus until they arrive at their destination and Jesus breaks bread with them.  All the lesson plans I read about where about seeing, and involved seeing games, which didn't really seem quite right.

I feel that way about a lot of children's Sunday School lessons, to be honest.  They are focused on a secondary element of the story, and because of that, they don't really foster an understanding of the story or the lesson.  If the story is about Jesus as the shepherd, and the craft involves making cotton-ball sheep, I mean yeah, it's technically related to the story, but will kids really remember what the story was, if you ask them a week later?

So oftentimes my lesson plans diverge sharply from the script.  This is one of those times.  If the divergence leads me to a baking project, well, so much the better.

I thought it might fit better if the kids had a treasure hunt, leading them to a picnic with bread they can break apart together.  I feel like that fits more with the "revealing" aspect of the story.  A few minutes later, and I knew the perfect bread for the occasion: pull-apart bread, also called Monkey Bread.

I have no idea why it's called Monkey Bread, and it sounds like no one else does either.  Also, Monkey Bread seems to signify a certain type of rich bread smothered in sugar and butter.  So that's why I'm calling it pull-apart bread.  Just trying to manage expectations.

I got the recipe from here, but with a lot of variations. 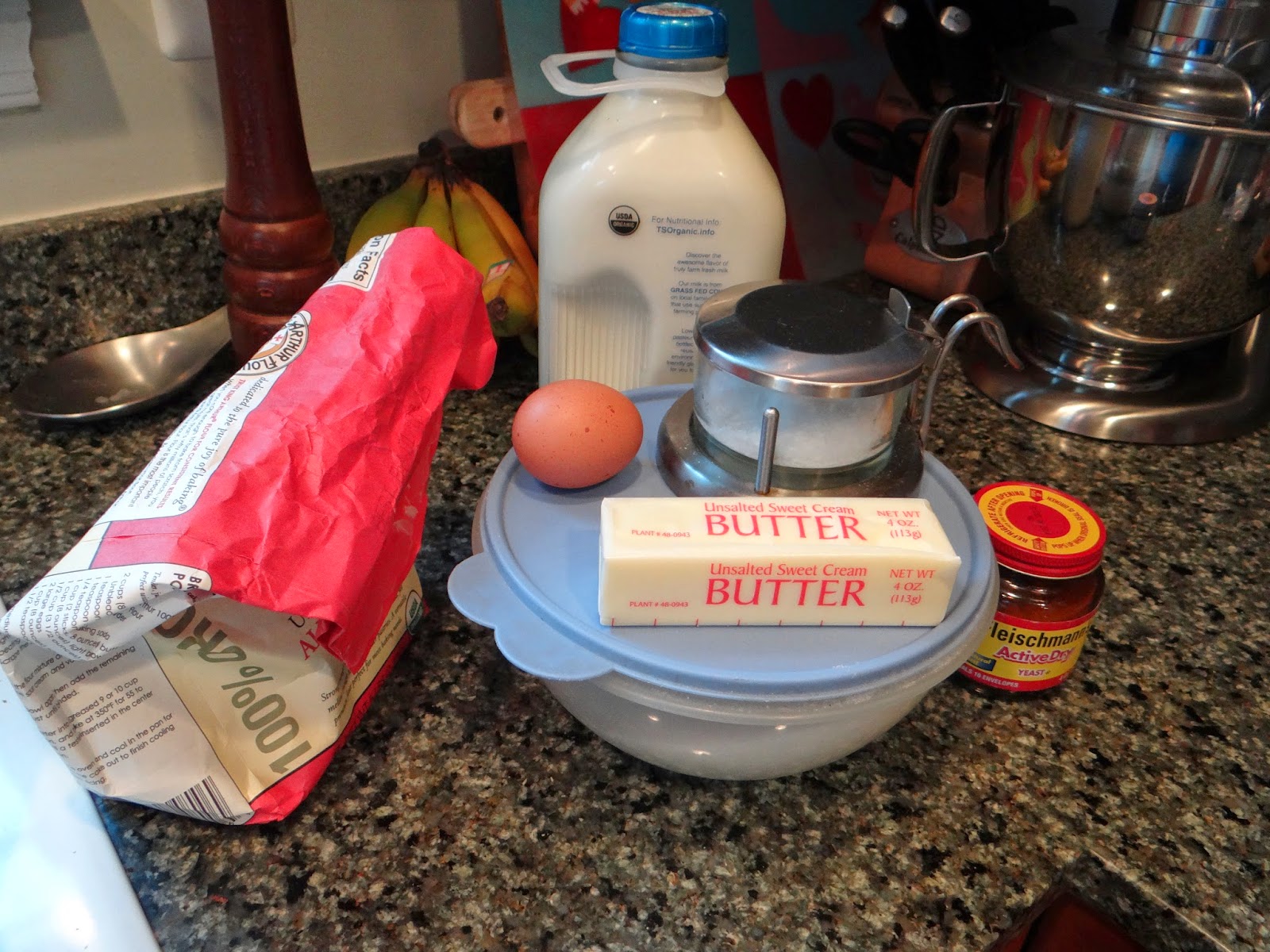 1. First, grease a round aluminum cake pan or bundt pan. 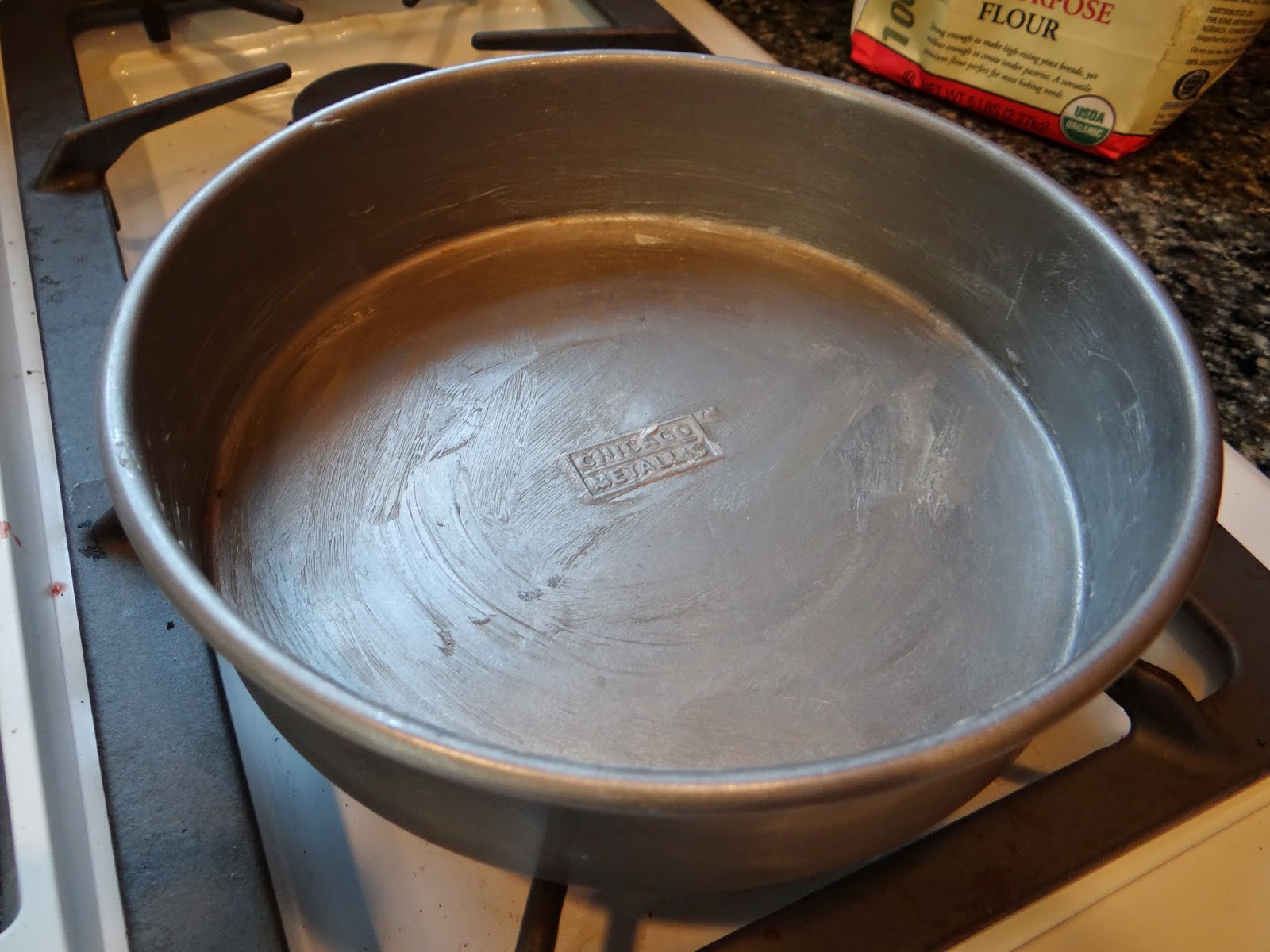 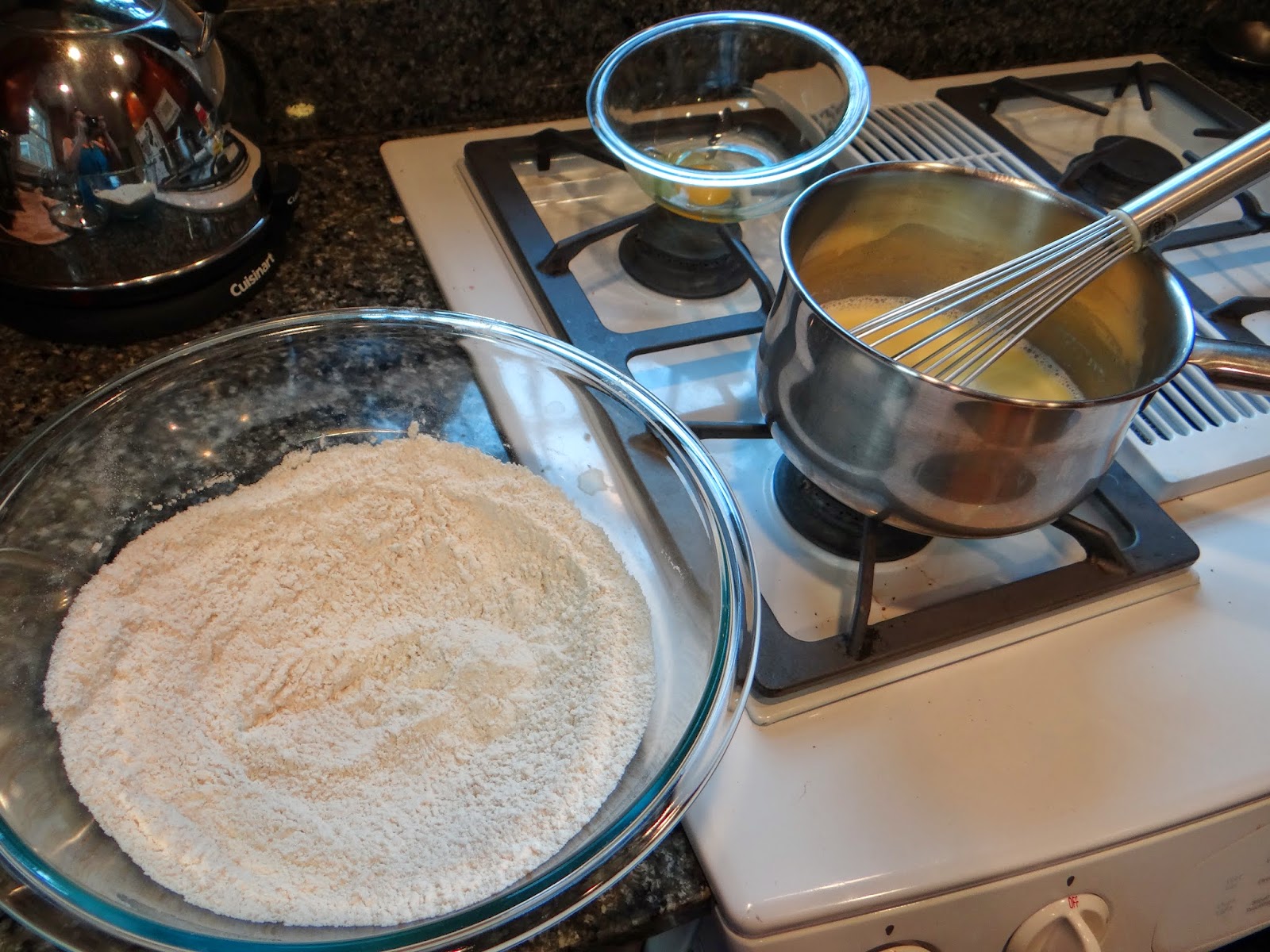 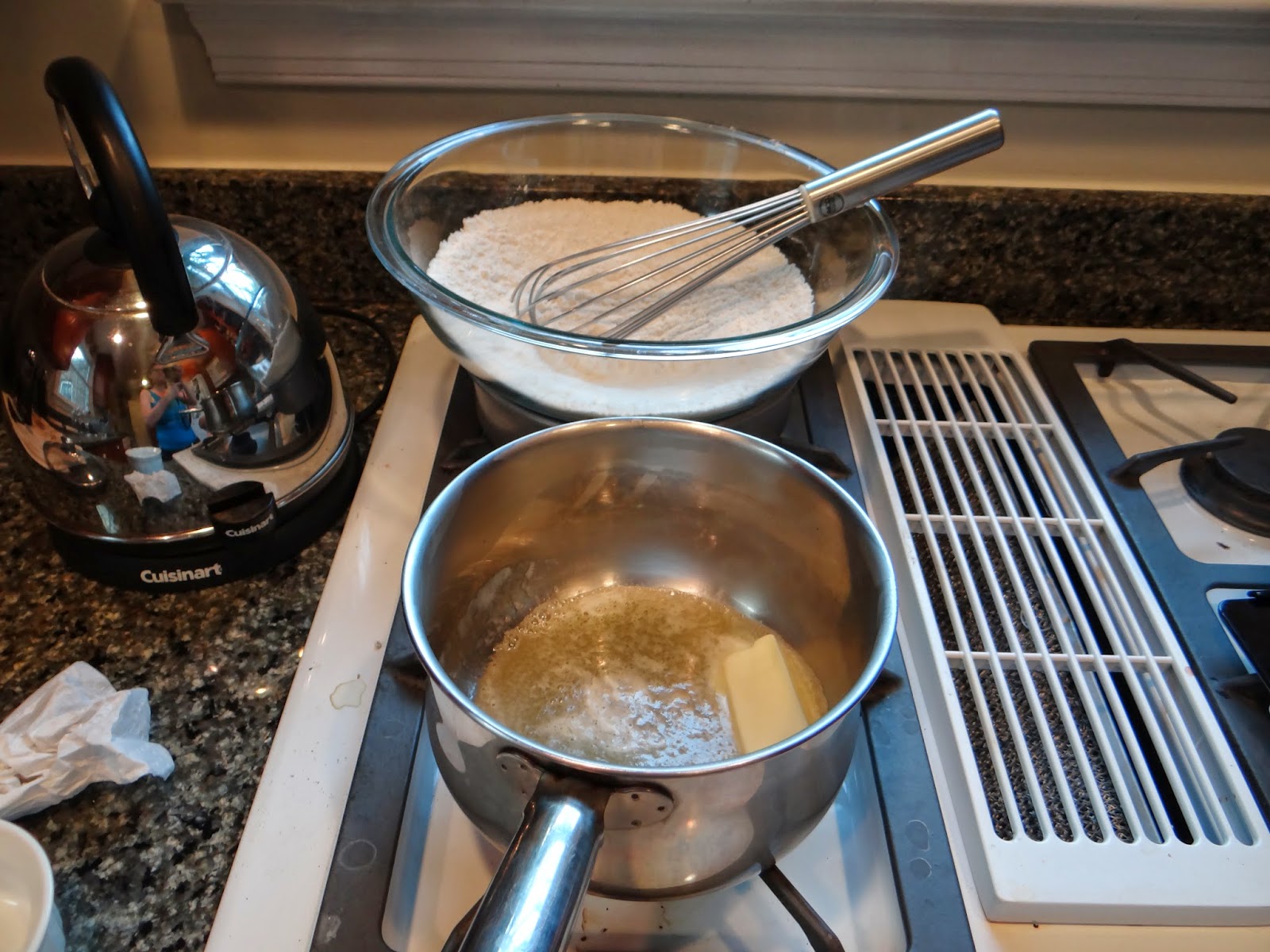 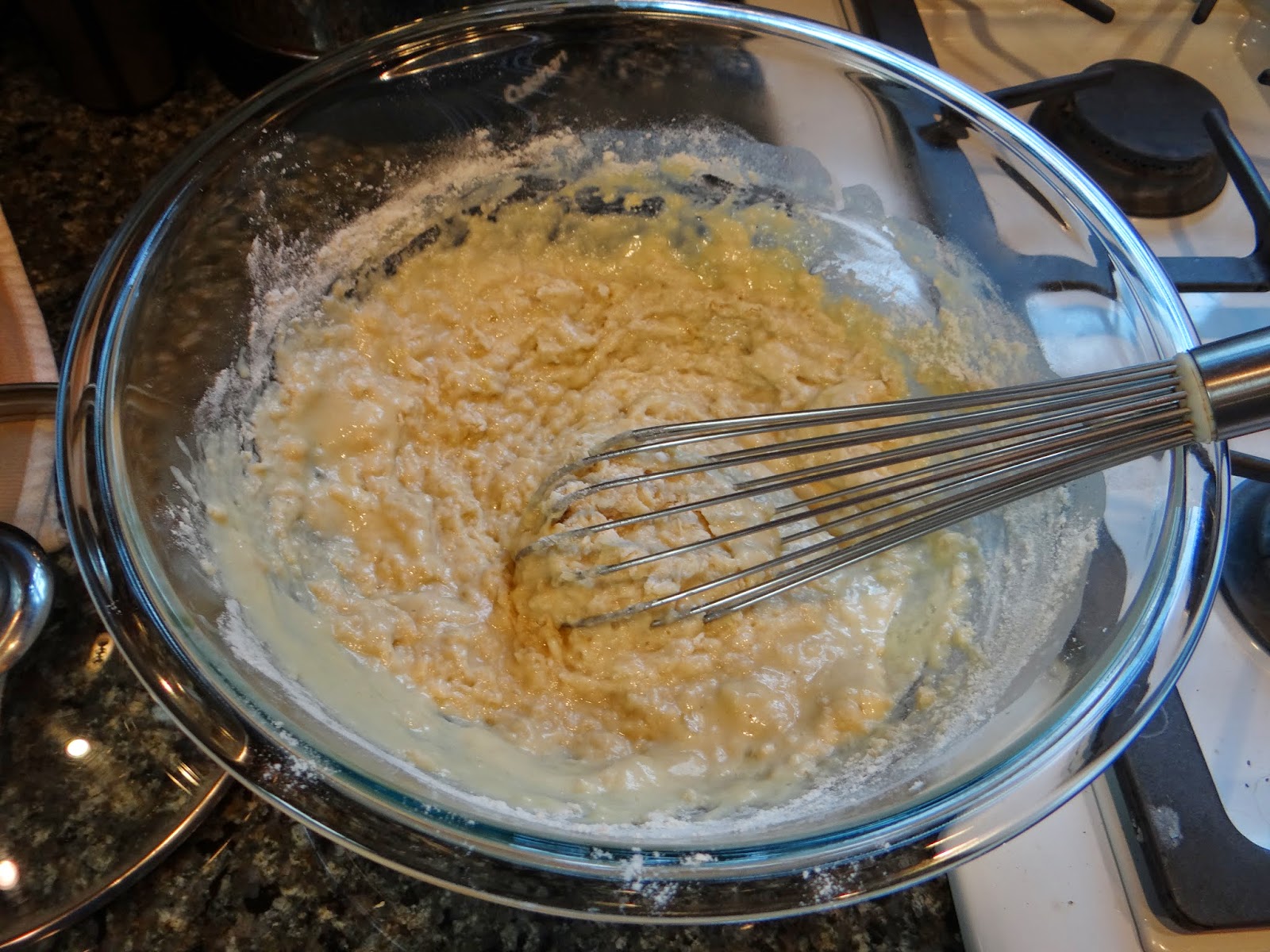 5. Add the rest of the flour, 1/2 cup at a time, until you have a nice dough that isn't sticky but is still workable.  Here's what my dough looked like after one 1/2 cup, and after a cup (I didn't need the whole extra 1 1/2 cups of flour).  At some point I switched from mixing by whisk to mixing by hand. 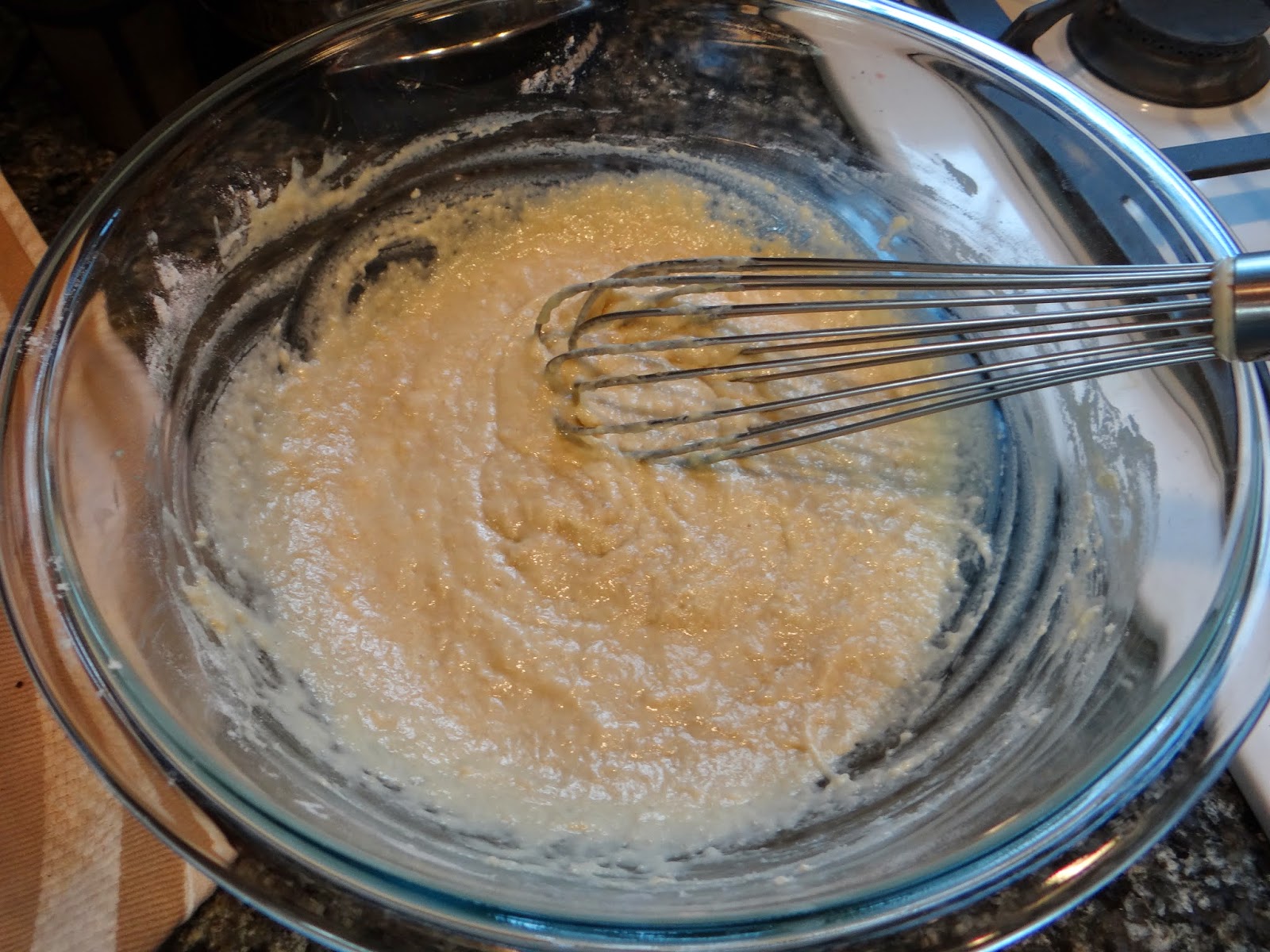 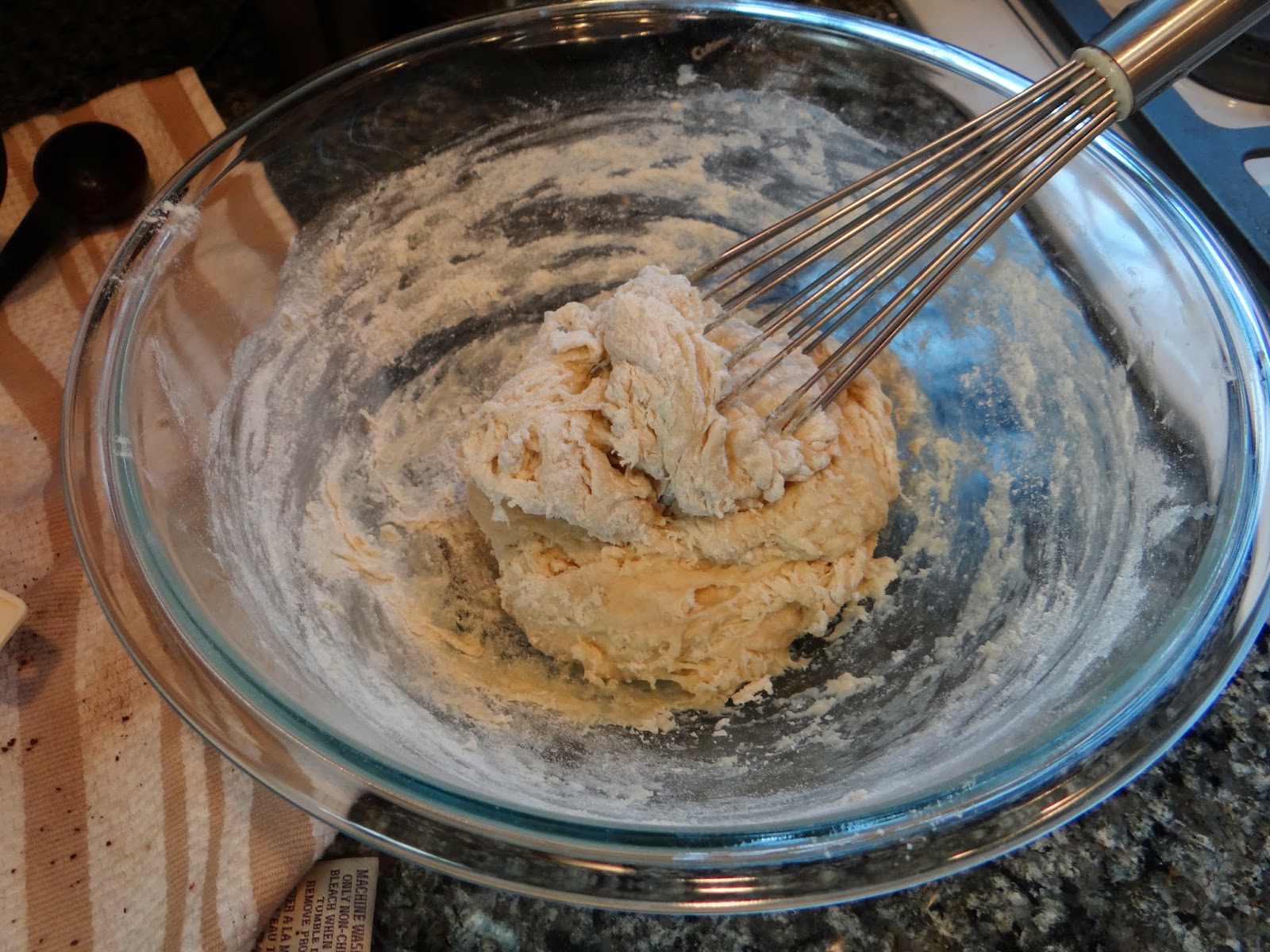 Ok, I think I added 1/4 cup of flour after this because I could see it was getting close. 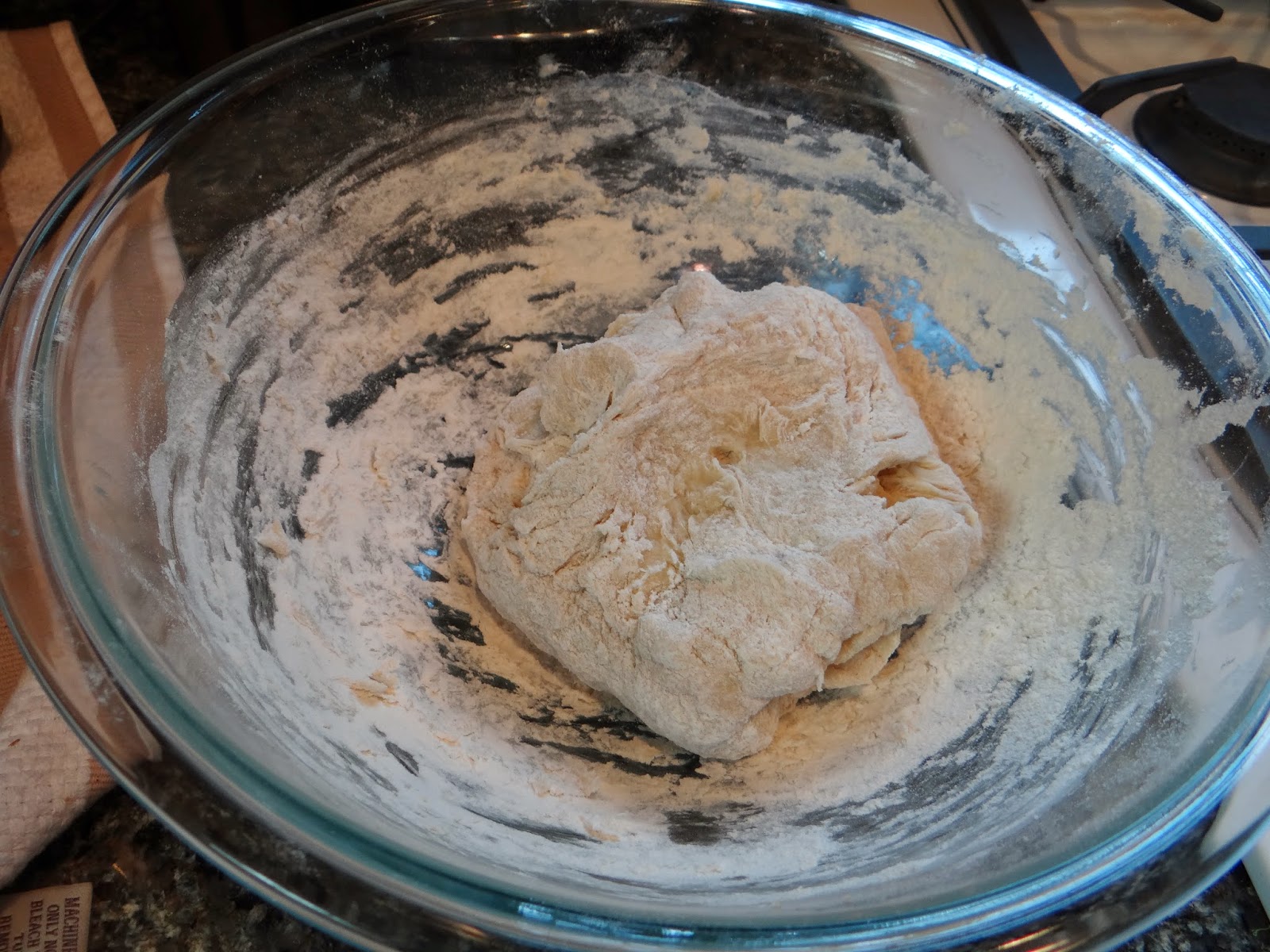 7. Then I moved it to a floured countertop. 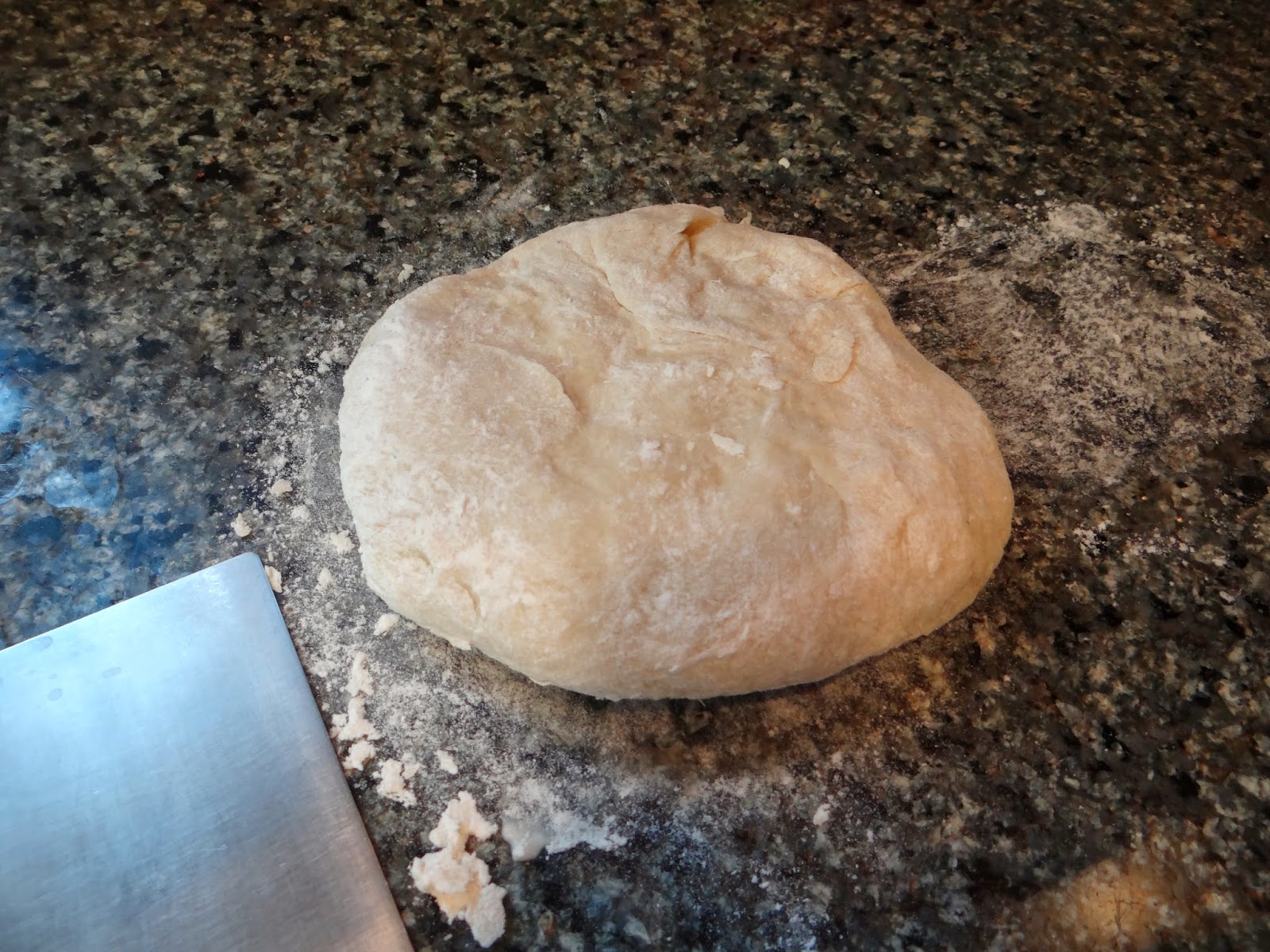 8. Using the bench scraper, I cut the dough into twelve pieces.  Next time, I will probably cut it into 24 pieces, because that's more fun. 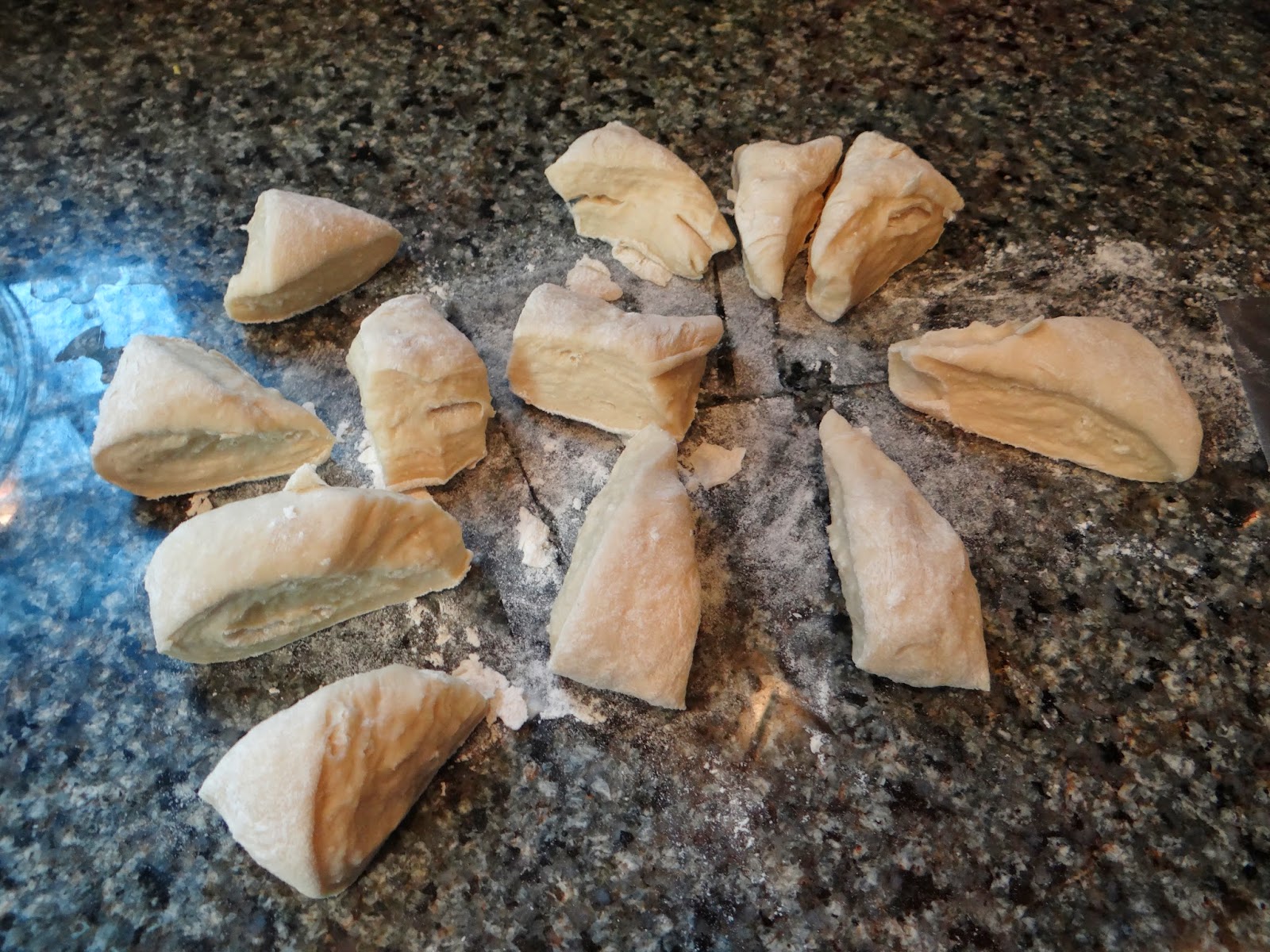 9.  I let them rest for about five minutes, then I rolled them into balls. 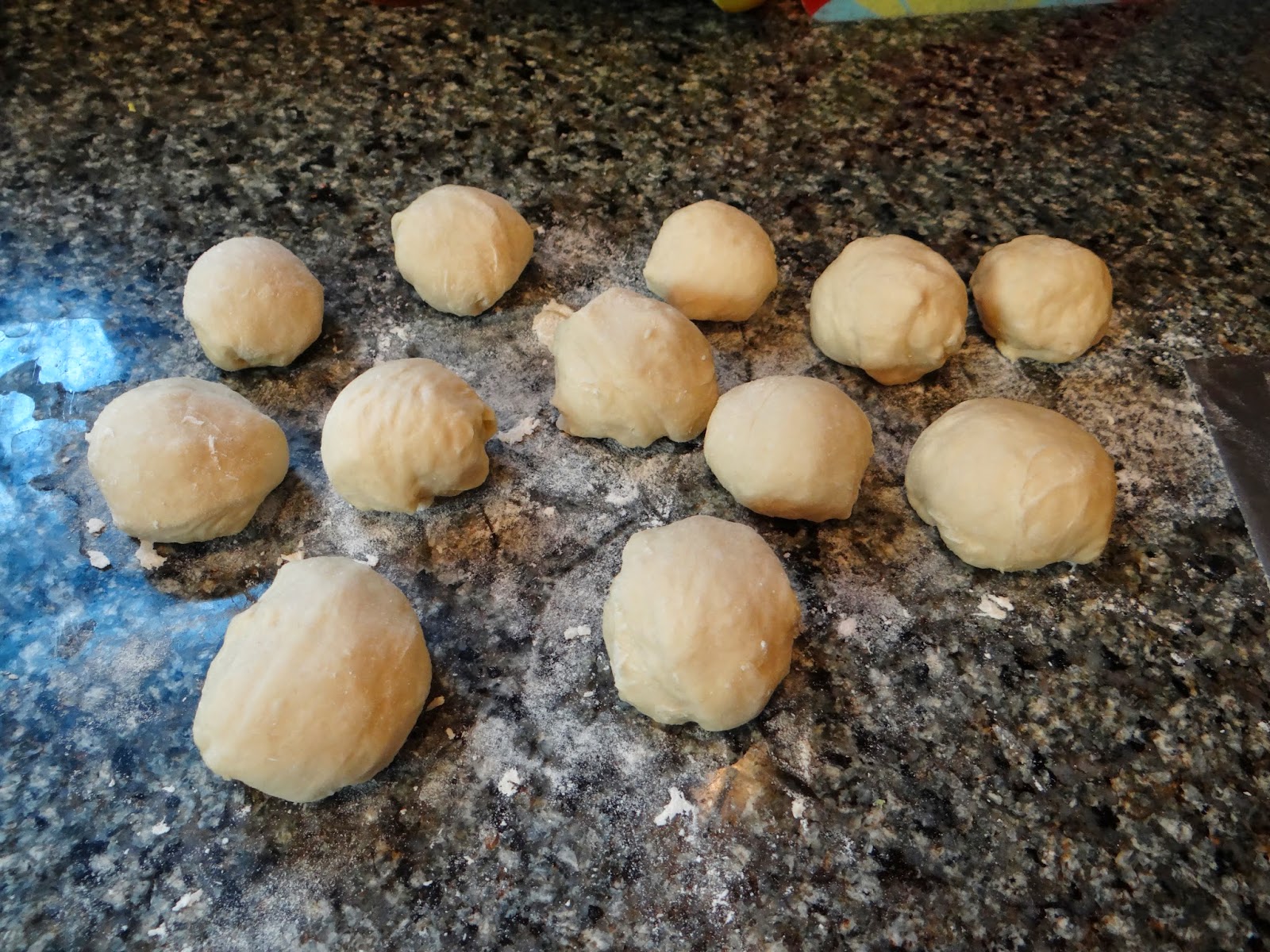 10. I let them rest again while I melted the other 1/4 cup of butter in the microwave.  Carefully dip each ball into the butter and roll around to coat.  Then place each ball into the greased cake pan.  You will have butter left over, but don't throw it away! 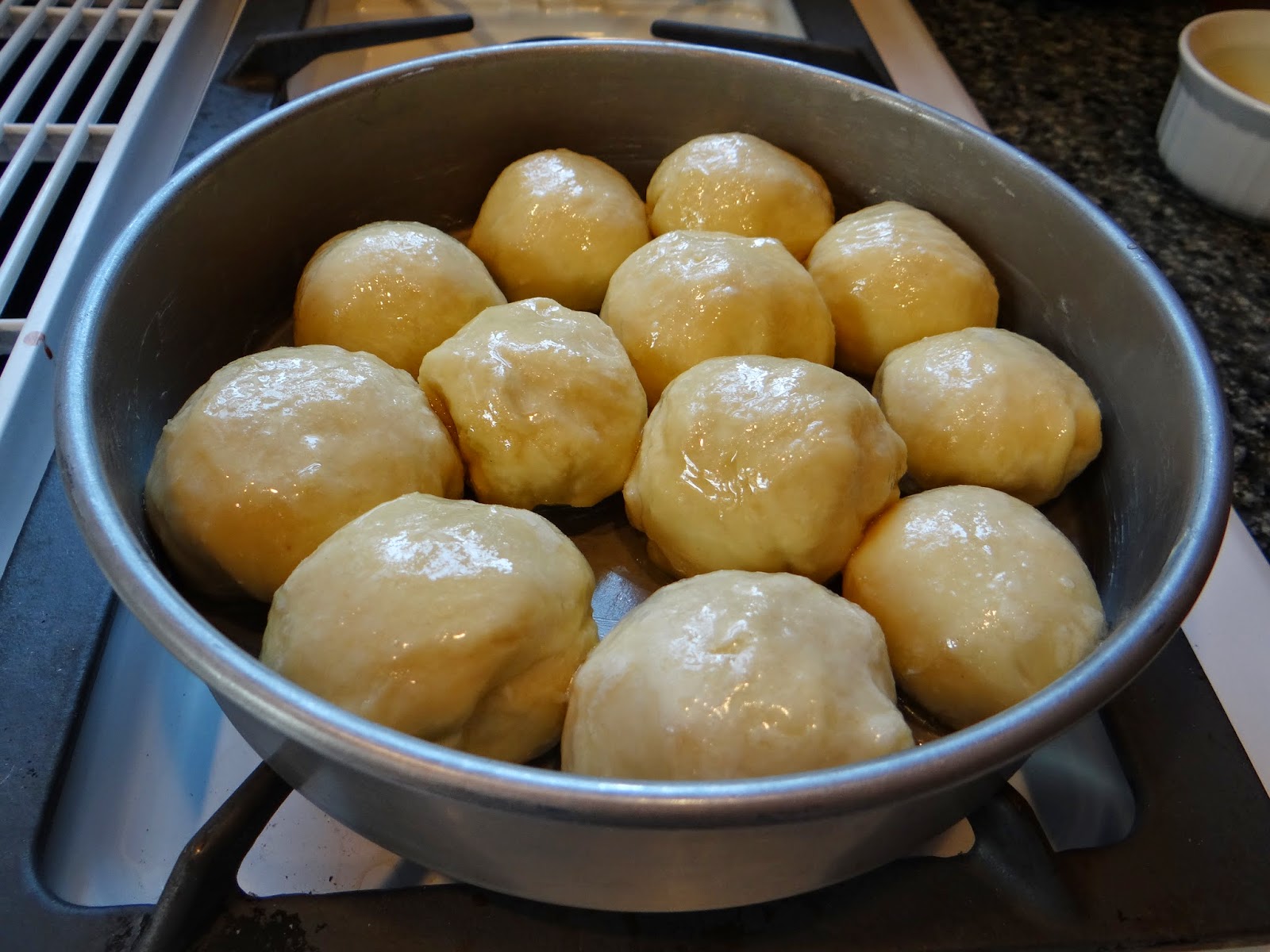 11.  Cover the pan with plastic wrap or my new favorite thing, shower caps for covering food:

12. I let them rise for about two hours, until they looked like this: 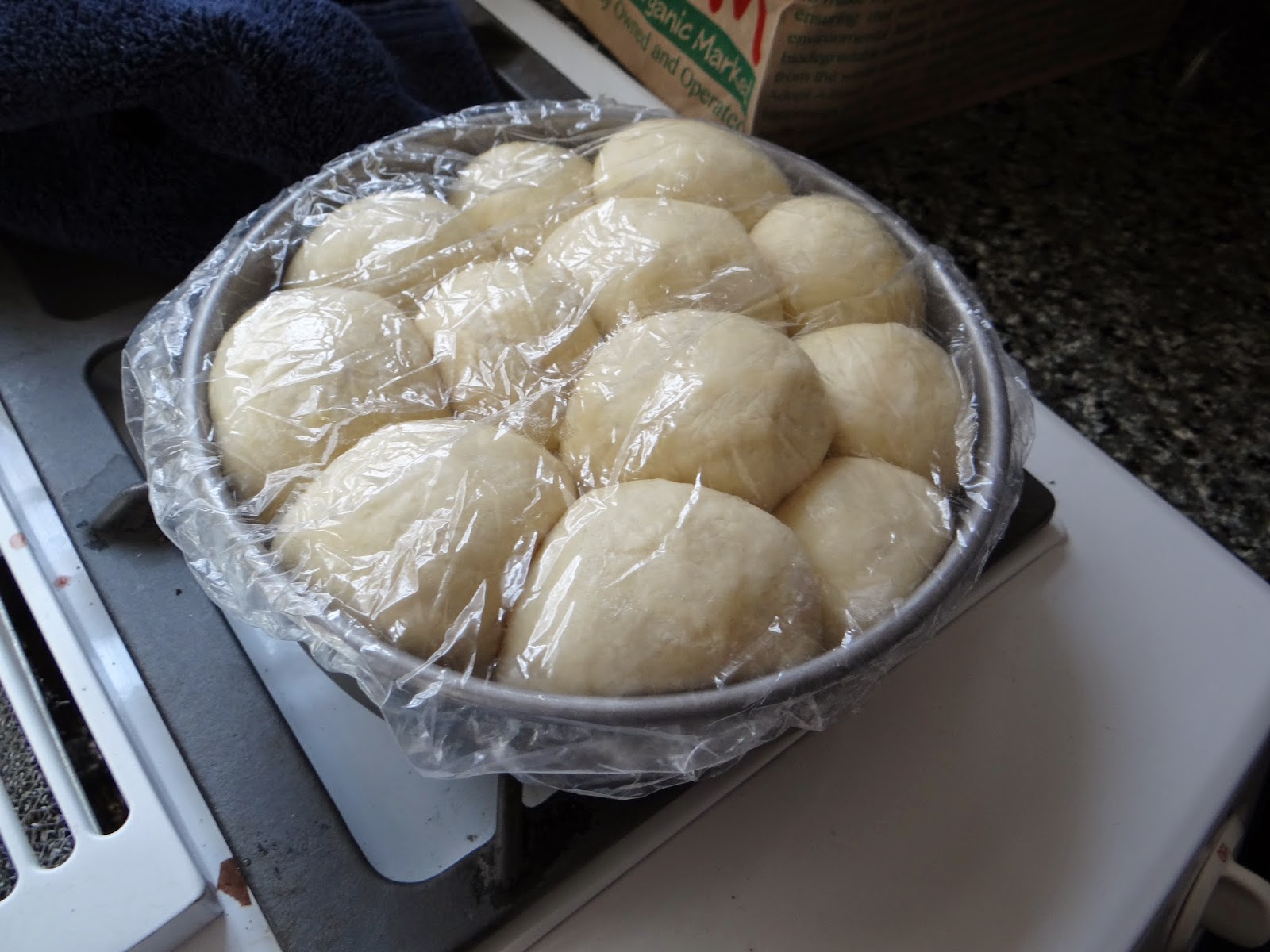 13. I preheated the oven to 375 degrees F, and used the leftover melted butter to cover the top of the loaf.  Then bake in the oven for about 30 minutes. 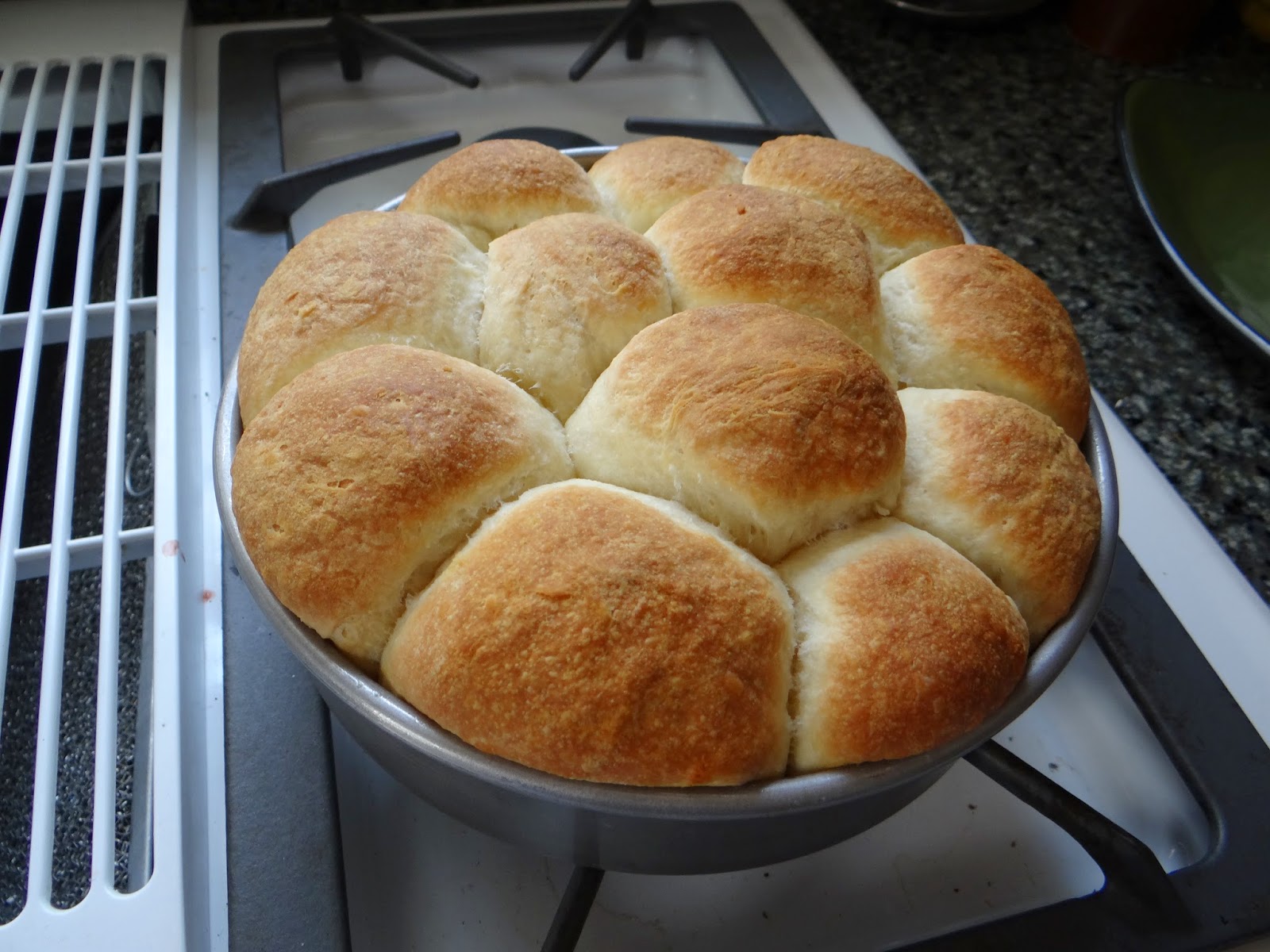 I left it in the pan to cool, then dumped it onto a cooling rack. I'm pretty excited, and I think the kids will love their treasure hunt to reveal this fun bread.  You could make it with any dough I think.  Happy baking!
Posted by Bread Maiden at 1:38 PM 3 comments: 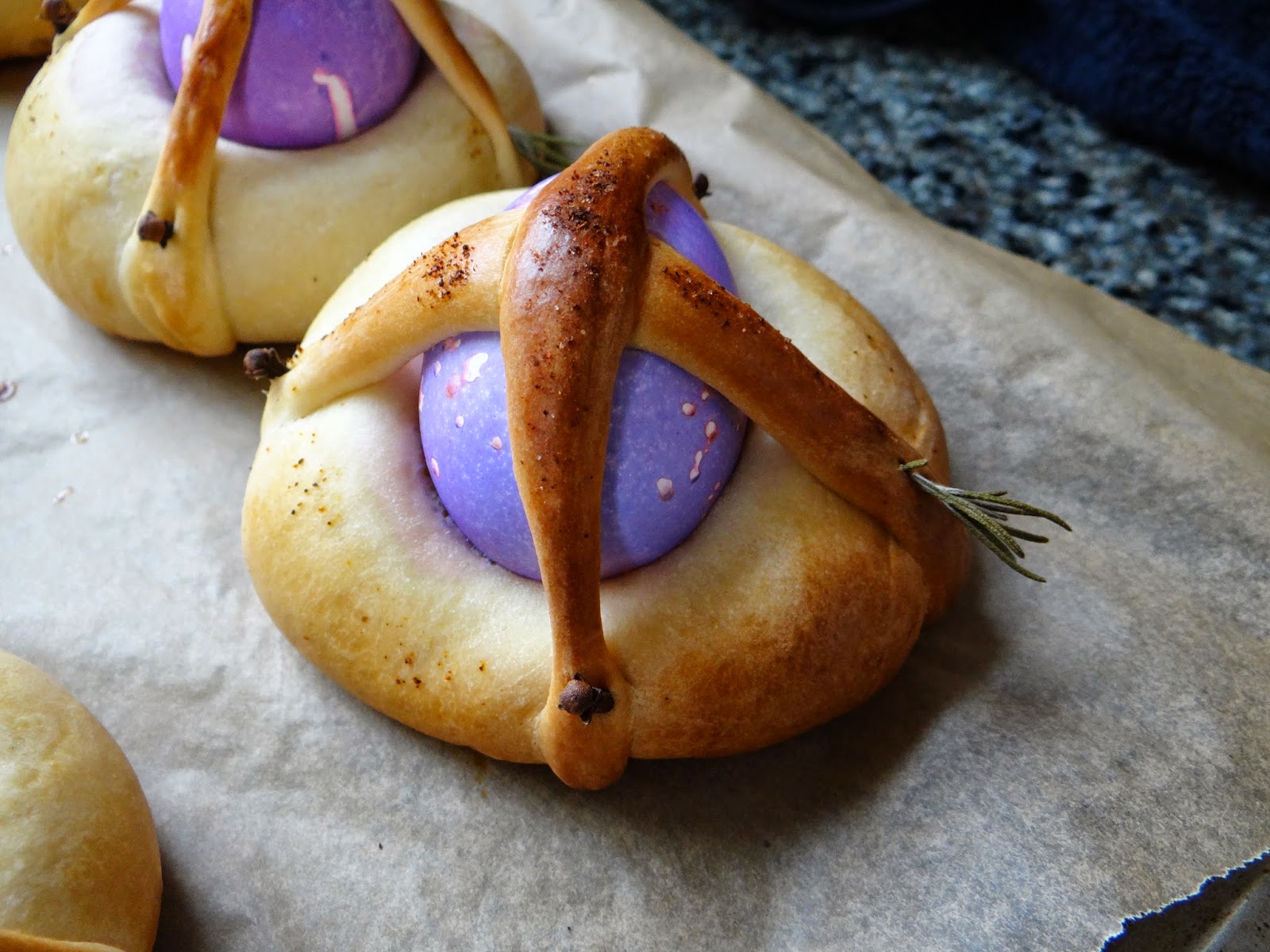 When I was little, my favorite part of Easter Sunday was the children's story, when we all got a little bun that we could use to tell the story of Easter.  It was the most delicious bread I had ever tasted: sweet, rich, and beautiful with the deep color of the dyed egg contrasting with the light color of the bread dough.  It was a sad year when my parents said I was too old to go up for the Easter children's story (I think I was 13 at the time, so definitely way too old).  Also if I recall correctly I was wearing a mini skirt to church, so yeah.  I think by that point I was already opting out of church, but once Easter rolled around, I WAS going to get one of those breads, faith or no faith.

Since then, it's been a long, slow process getting back to church.  What has helped this time around is that it's been on my terms.  Don't ever, ever, EVER ask me to lead a prayer circle or a bible study, but bake bread for communion?  That I can do.  I'm still figuring out how I feel about the whole Jesus thing.  But serving others?  That is where I feel happy and capable and spiritual.

Anyway, this year there was a call put out for anyone who wanted to help make Easter Bread, and I jumped at the opportunity.

At the request of the recipe's creator, I will not be posting about the recipe or the process. 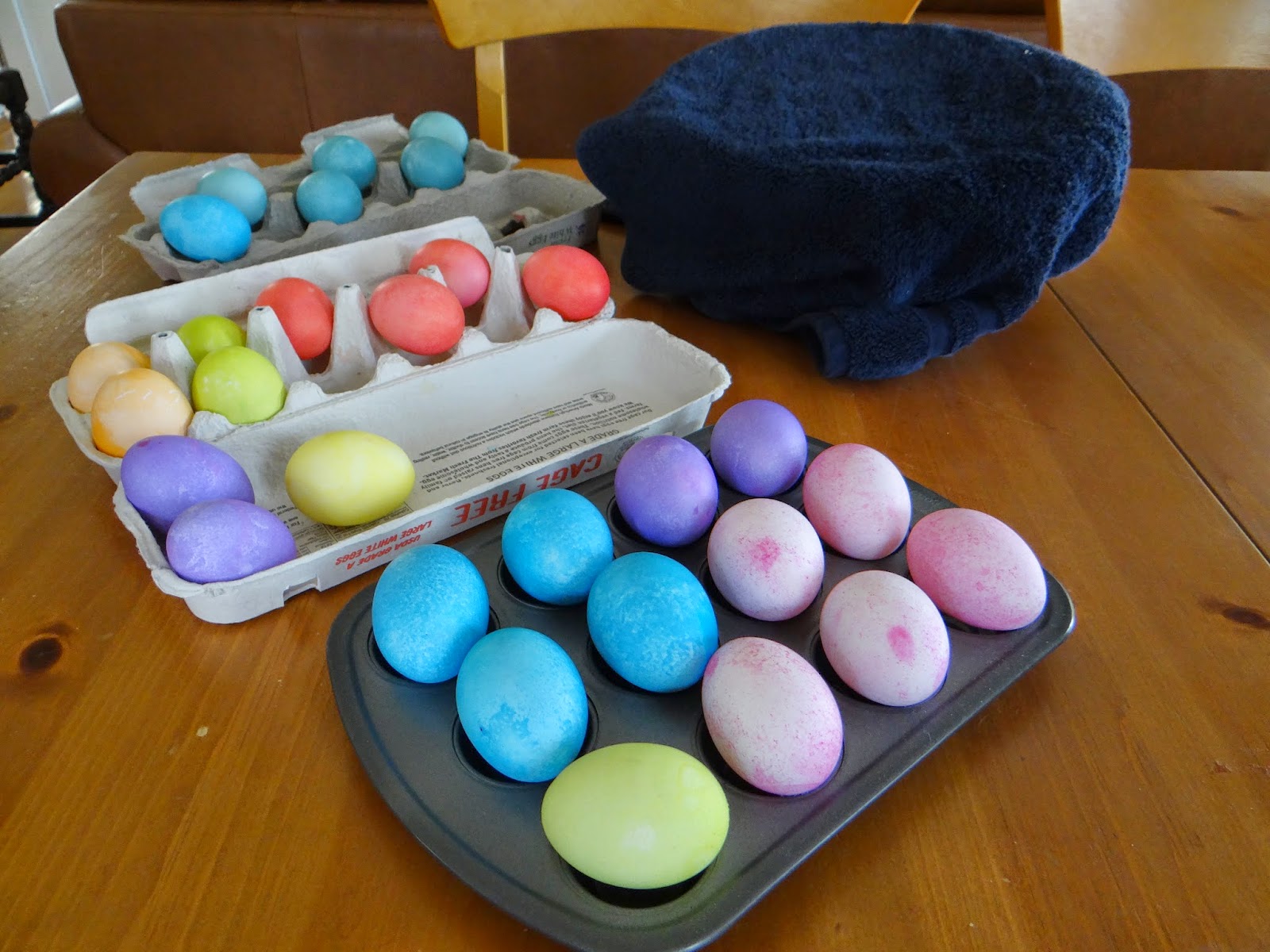 I recently read an article on Jezebel called something like, "This is why we're the atheist generation."  The point basically was that people my age are tired of the hypocrisy of organized religion, but are still looking for the elements of worship, specifically things that are meaningful.

While on the surface, making bread for my church could be seen as a chore, to me it's not at all.  It's symbolically feeding my community.  Making the Easter breads is my way of connecting my childhood to the next generation of kids, of providing memories of being loved and cared for.  Also, it's something that only the kids get, so they feel special.

Anyway, so the neat thing about these breads is that each element is symbolic.  The cloves, the rosemary, the cayenne pepper, the egg.  The recipe creator has added to and perfected this recipe over time, and it shows.

Here is what they look like assembled and ready to go into the oven: 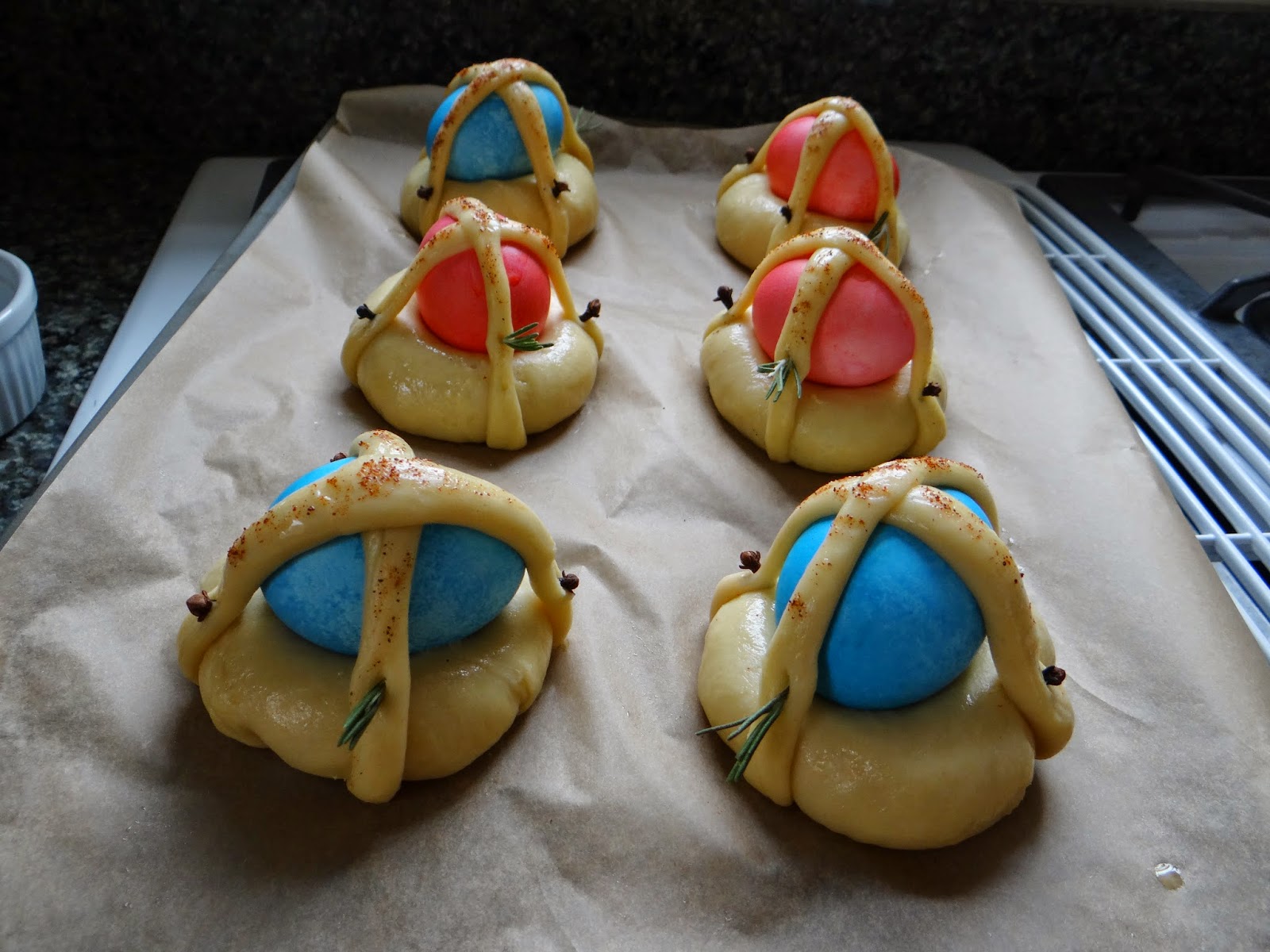 Here is what they look like out of the oven (obviously a different set of six buns, ha ha): 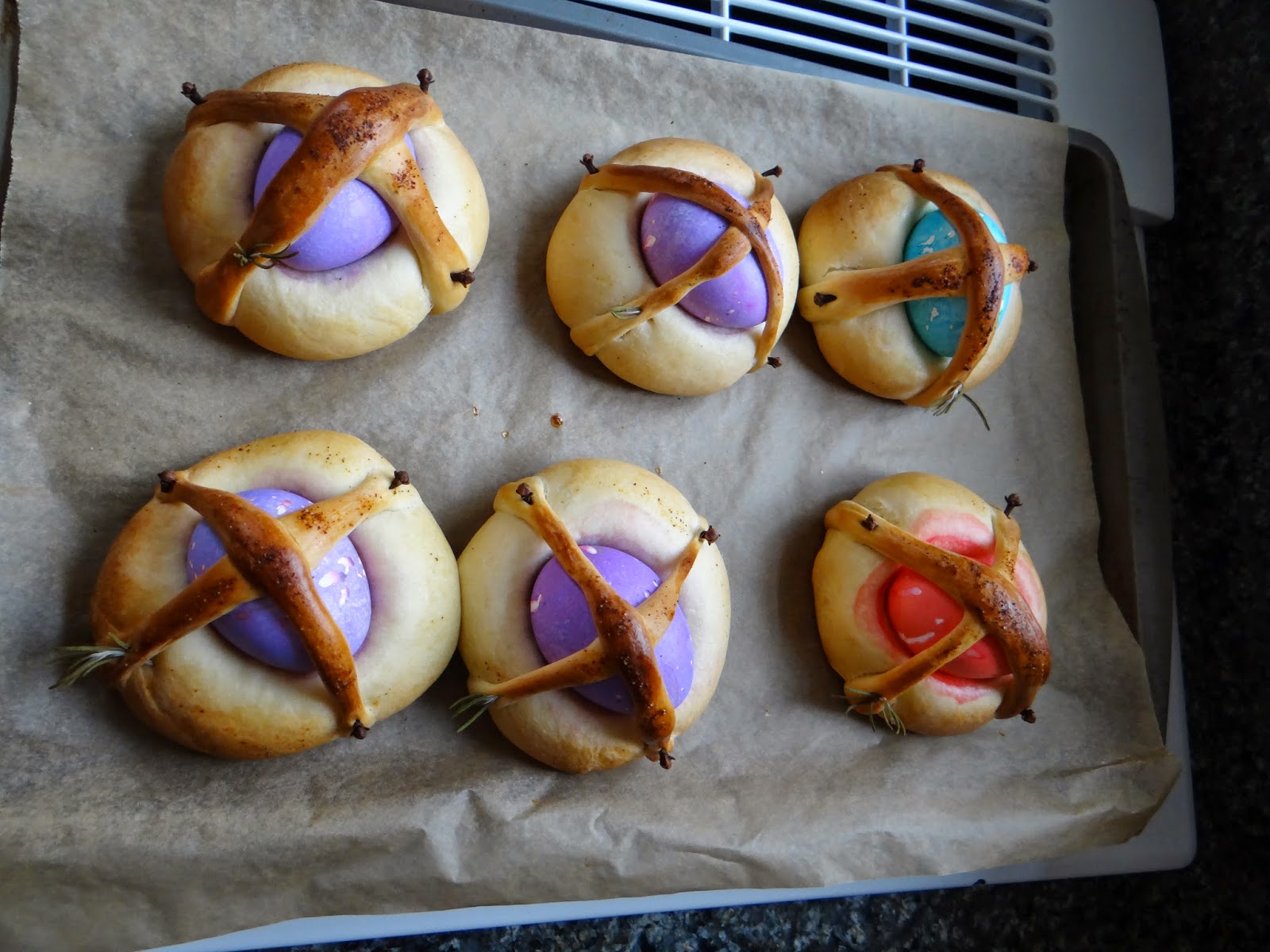 I hope I can help make these Easter Breads again.  The experience of making them was deeply meaningful to me.  Happy Easter (and Passover) everyone. 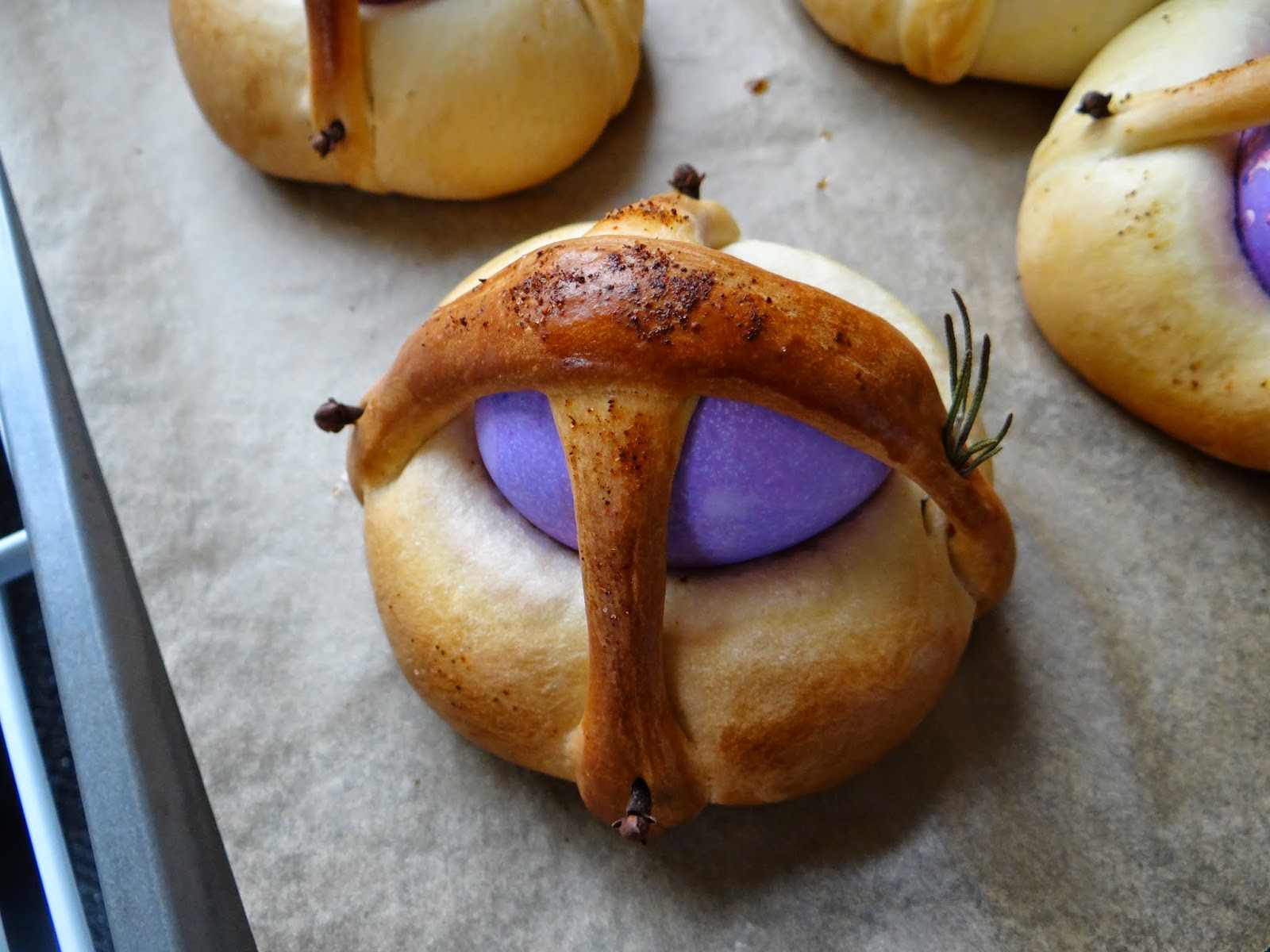