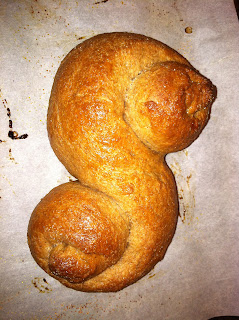 It's getting to be that season when all I can think about is deliciously rich holiday breads.

While I can't make a decent cookie to save my life, I LOVE traditional breads with loads of dried fruit, maybe some alcohol, some nuts, in a special traditional shape.  I love all the regional variations: kugelhopf, stollen, panettone, pan dulce, yulekage, fruitcake, etc. 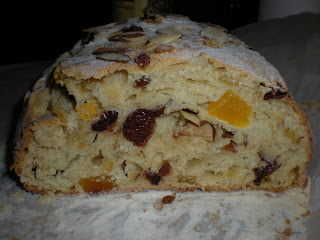 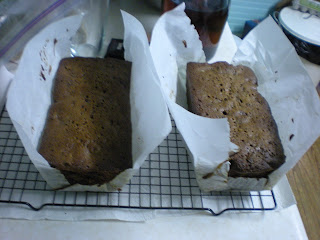 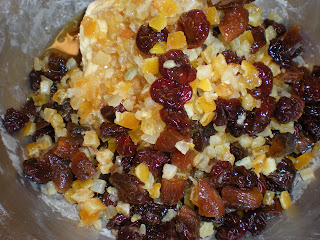 These St. Lucia buns are not a bread laden down with all the add-ins, but it is a Christmas bread.  I first learned about these buns when I was seven or eight, and totally obsessed with the American Girl book series.

Kirsten Larson was a Swedish immigrant girl who came to the United States with her family in the mid 1800s.  They celebrated St. Lucia Day, and so it's been in the back of my mind ever since.

St. Lucia was a saint from Scandinavia who sacrificed herself for her faith some way or another.  Anyway, the shape is supposed to represent her eyes, and the day (December 13) serves as a reminder that the dark days of winter are almost over (Lucia means light).  According to custom, the eldest daughter wakes up the family with St. Lucia buns and tea or coffee.  This post from someone I've never met makes me tear up a little.  What a sweet and dutiful girl!

I wish I had an eldest daughter :( Although I am glad my family never celebrated St. Lucia day, because I AM the eldest daughter and when I was younger I would've been loathe to wake up early to make breakfast for my family.  Good thing we're not Swedish.


I think it is important to point out that I have never eaten St. Lucia buns, made by someone Swedish or otherwise.  But Peter Reinhart has a recipe for whole wheat buns, and I'm always interested in trying another of his recipes from the Whole Grain Breads book.

The recipe starts out similarly to his other WGB epoxy method breads, with a soaker and a biga.  However, he uses scalded milk in the soaker and an egg in the biga, so that's a little interesting.

To make St. Lucia Buns a la Peter Reinhart, you will need:

BIGA
227g whole wheat flour
3/4 cup scalded milk (heat the milk up to just below a boil, then let cool and skim off the top)
1g yeast (I used 4g since I began the dough in the morning and wanted to bake them in the afternoon)
1 egg, lightly beaten

Here is the scalded milk, in case you were interested.  This is before I skimmed off the film. 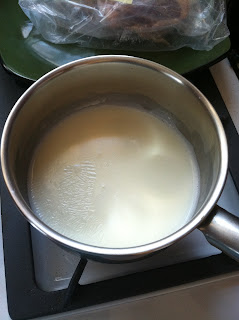 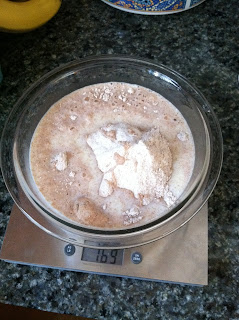 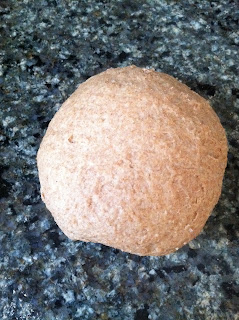 
This is the soaker dough first mixed up. 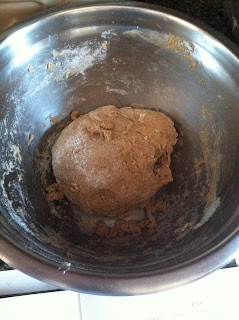 Here is the dough after a 15 minute rest. 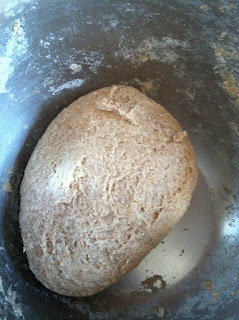 One thing that I've learned since making a whole bunch of Peter Reinhart's WBG recipes is that you want the biga and the soaker to be about the same hydration and texture. 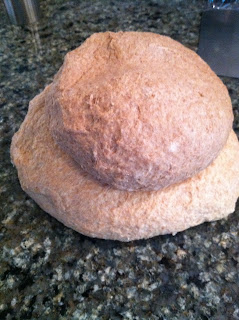 If one is overly runny, that is not a good sign.  You want to be able to stack one dough on top of the other to cut them into little pieces before adding them to the final dough. 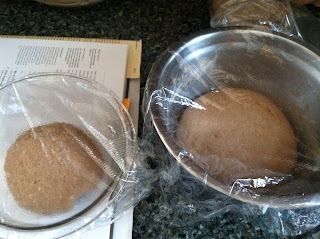 If you want to make the final dough and bake these buns the next day, you can throw the biga in the fridge and leave the soaker out on the counter overnight. 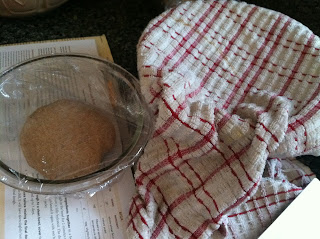 While you're waiting, here are some pictures of herbs from our garden that Mr. Bread Maiden has tied up and hung in our kitchen. 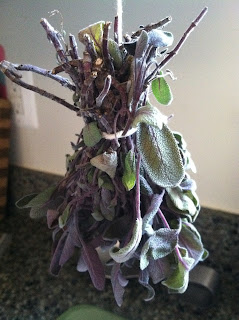 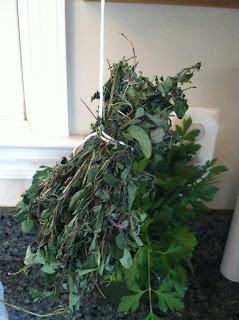 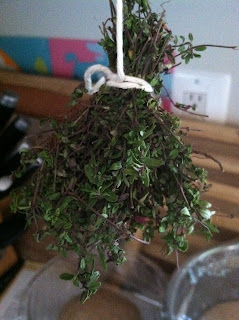 If, like me, you want to make the dough after a few hours (and you've added the necessary extra yeast) you can proceed to the next step, which is:

FINAL DOUGH
All the biga
All the soaker
113g whole wheat flour
5g salt
7g instant yeast (Mr. Bread Maiden was making cassoulet during the time I meant to bake the buns, so I omitted the extra yeast in an attempt to draw out the rise time until the oven was free)
71g honey, agave nector, sugar or brown sugar (I usually add both 71g of sugar and 71g honey)
56.5g vegetable oil or melted butter
1 egg (for egg wash)
raisins (for topping)

1. Chop up the soaker and biga into small, tablespoon-size pieces and mix them together with the flour, salt, yeast, honey, and vegetable oil. 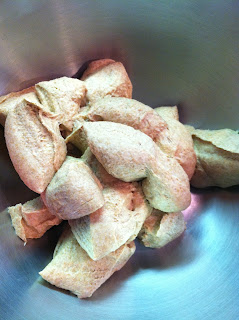 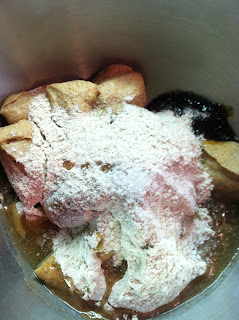 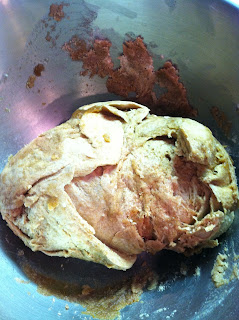 2. Dust a work surface with flour, then knead the dough for 3-4 minutes until the dough feels tacky.  Let it rest five minutes, then knead another minute or so and remove to an oiled bowl.  Cover with plastic wrap and let it rise about 60 minutes.

*I let the dough rise for about two hours since oven space was scarce.  I added more yeast in the biga than PR's recipe calls for, and no yeast in the final dough. 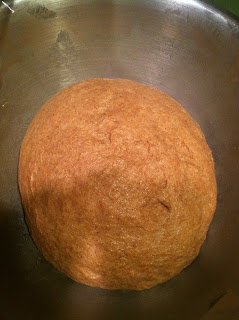 3.  Line a sheet pan with parchment paper and preheat the oven to 425 degrees F.  Divide the dough into 8-12 pieces, and shape each into a ball.  Let each piece rest for 10 minutes.  I've found they cook more evenly if I don't try to eyeball them, but take the total weight of the final dough and divide by the number of buns I want to make.  That is the weight of each bun! 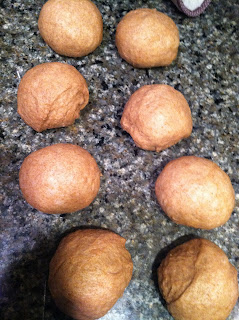 4. Roll out each ball into a tube, like you're making a strand of challah.  Roll them a little and then let them relax before continuing to roll.  Mine were about 1.5 feet long. 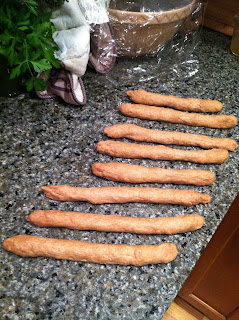 5.  Roll each end back up towards the middle like a yo-yo, into an "S" shape. 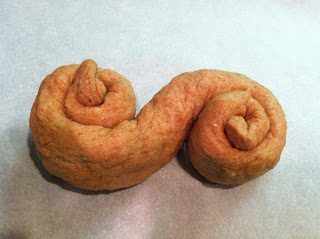 6. Place each shaped bun on the parchment paper, cover with plastic wrap, and let rest another hour or so. 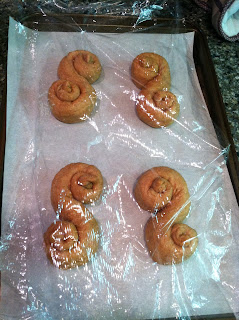 After an hour rise 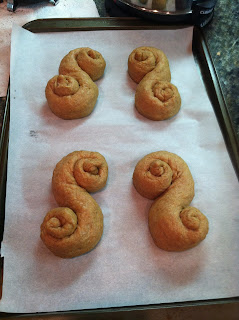 7. Take the plastic wrap off the buns and brush with the beaten egg.  I also sprinkled them with sugar for extra sweetness.  Place the pan in the oven and knock the temperature down to 350 degrees F.  Back for 15 minutes, then rotate the pan and bake another 10-20 minutes until golden brown and hollow when given a good thump. 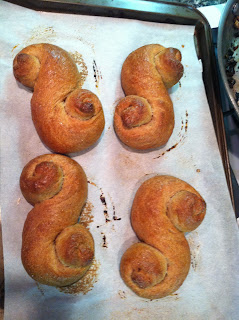 9. Transfer the buns to a cooling rack and serve when they're ready or you just can't wait anymore.  You can pretend with all the whole wheat flour that they are healthy.  Actually, compared to most Christmas confections, they ARE :) 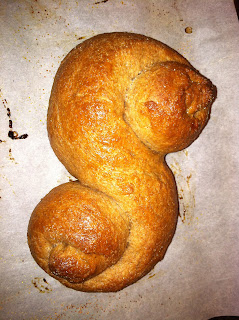 You can eat two for me!  Merry Christmas!
Posted by Bread Maiden at 11:37 AM

Outstanding! I'm starved now! My Grandmothers both baked bread from scratch and I miss the aroma and flavor of homemade bread. As soon as I get my new kitchen - 4 years from now - I will put up my Mom's Kitchenaid mixer and make bread from scratch!